Drink the pain away! 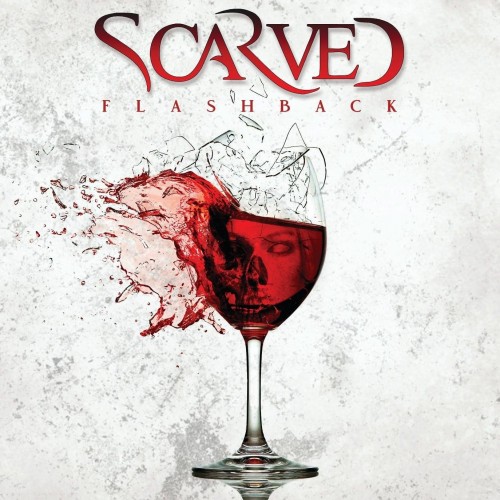 I first encountered Scarved back in 2017 when Hard Life Promotion had offered me to review the band’s second album, “Lodestone,” which was released earlier that year (read our review of that release here: https://www.belgianmetalshredder.be/reviews/71). And now HLP is back to request my thoughts of Scarved’s freshly released 3rd full-length! Let’s shred this one ever better than the previous one!

“Flashback” is the 3rd album from the Belgian hard rock band Scarved and like their previous 2 albums, “Flashback” is also released via the Greek record label Sleaszy Rider Records with Benelux distribution handled by Sonic Rendezvous. The album begins with a fast and groovy tune called “Fly” that breathes some classic 70s Motörhead thanks to the heavy bass and expressive guitars.

Next up is the rocking title track. “Flashback” is a catchy song that feels joyful on the surface (a song that’s great to drink to) but whose lyrics show the song’s true, smoldering dark side (a song that’s great to drink away your life’s misery). Then comes “Schizophrenic,” an even darker and heavier song whose beats are intense enough for me to headbang like a lunatic. “Nightshift” is a bluesy track that reminds me of AC/DC’s iconic “Night Prowler.” I love how this particular track builds up towards an adrenaline-pumping section of energetic guitars and marching drums.

Speaking of AC/DC, the album’s next track “Poison Kiss” features some soaring power chords that instantly made me of think of those Australian hard rock legends. This tune’s orchestral rock ending was also pretty effective. Next up is “Head Over Heels,” a frantic song about unrequited love (quite original to hear a song like this from a female perspective). “Rising Soul” is a slow burner but the guitar solos are pretty nice.

A ballad called “Lost In Space” comes next and I can already call this a real standout track on “Flashback.” It’s a peaceful and meditative track that gradually becomes more complex and intense and I think this song would also fit very well for a funeral, it’s even about seeking answers from the “other side.” The album then transitions to a heavy rocking tune called “Lockdown” that, as the song suggests, deals with the COVID-19 pandemic and the band’s desire to create their own little world until the “invisible” monster has died. I particularly love the keyboards on this one, it gives the song a sweet orchestral vibe and the anger-filled vocals make it all even better. And finally there’s the bonus track “Catch Me Offline,” a chilled-out but rather cheesy hard rock song (the theme of the song however is fun and original).

Overall, Scarved’s sound takes elements from 1970s rock acts like Heart, AC/DC and Black Sabbath. Heart in particular came to my mind when I was listening my way through “Flashback.” Compared to their 2017 predecessor “Lodestone,” most songs on “Flashback” have slower and heavier beats as well as more variety in terms of instrumentation, pacing and overall atmosphere. In addition, the band’s production is clearly improved which has resulted into a crisper and heavier sounding album that perfectly fits the band’s straight-forward hard rock style. While Scarved may sound cheerful on the album, when you dig deeper, however, you’ll notice that the material on “Flashback” is quite grim and we’ll talk about that grimness right now.

The cover art of “Flashback” shows a shattering glass of red wine and while this image sounds simplistic on paper, I really admire the details in the artwork. The red wine inside the glass shows a woman’s face whose broken half has turned into a skull. The wine that comes out of the glass looks like blood being violently spilled. Overall, some beautifully metaphoric artwork and I’m all for that! The main themes on “Flashback” include songs about mental illness, drugs, alcohol and sexual abuse, rejection, social isolation and how getting drunk, reliving the past or living inside your own fantasies are seemingly possible ways to escape the pain.

My favorite tracks include the catchy title track, the blues song “Nightshift” and its upbeat follow-up “Poison Kiss,” the beautiful ballad “Lost In Space” and finally the symphonic, aggressive and very contemporarily themed “Lockdown.” Weakest tunes on this full-length for me are the drawn-out “Rising Soul” track and the rather unnecessary bonus track “Catch Me Offline” (the earlier song, “Lockdown” was a more suitable finale).

8,5 glass shatters out of 10. A more varied and better produced album compared to their predecessors, Scarved have beautifully expanded their 70s styled hard rock style that fans of such acts like AC/DC, Black Sabbath and Heart will certainly enjoy! Scarved’s heart of rock n’ roll is beating stronger than ever. Here’s “Flashback!”