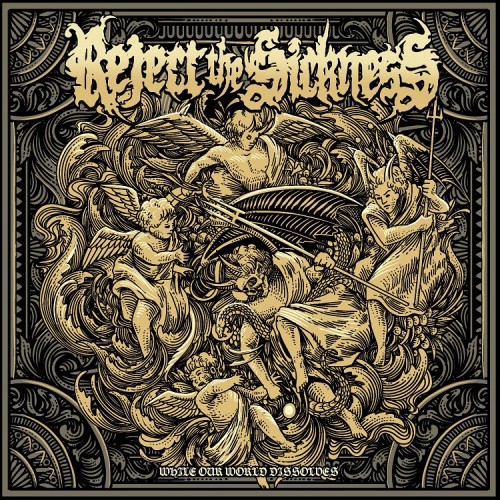 While Our World Dissolves by Reject The Sickness is launched on the 28th of May 2021 via Italian record label WormholeDeath and sent to us by Hard Life Promotion.   Since this is my first time reviewing an album, I have listened two times to this album. One quick listen during a bike ride and a more in-depth deep listening session in one go. I’ve heard from Reject The Sickness before, but never took the time to listen to them.

One should never judge a book by its cover, but as soon as the notes of the intro of the first track “Disconnect” flow out of my Hi-Fi speakers, what I suspected from a first glance at the album title and the tracklist is confirmed. The feeling I get is dystopian, a world that is coming to an end. A huge contrast with the words of the motivational speaker in the beginning.

I get several vibes listening to this album. “Disapproval Of The Weak” channels Kataklysm and Ex Deo. The riffs are fast paced and groovy at the same time. Sometimes I get Gojira-esque vibe, both from the guitars and the drums. The following track is immediately one of my favourites. “We All Burn” really is a banger which would cost me a lot of speeding tickets if I’d listen to this in the car.

Another track that caught my attention is “The Furrow Of Our Soul”, which has a similar sample as the first track, with an expert discussing issues that some children might have with their parents. Personally, I think this is a nice twist, this kind of samples always makes me think of Muse’s “The 2nd Law: Isolated System”. Overall, the production quality is top notch, compared to earlier releases it sounds a bit more polished and a slightly lower mastering volume, which is quite refreshing in this day and age of the loudness war and vanilla sausage.

Big horns up to the rhythm section, since the both the bass player and drummer carry the songs along like a steam roller;
The dystopian atmosphere that is created;
The vocals that made me think of Heaven Shall Burn at their best.

Frankly, it’s hard to find anything negative about this album, but if I really have to go into knitpicking, I’d say that several songs carry the same style of tremolopicking melodies, and while these contribute to the dystopian, almost black metal vibe, it’s a bit repetitive.

What can I say? From the opening notes of the first song until the final track, Reject The Sickness have delivered a gutpunch of a record. For me personally it combines what I like about Gojira, Heaven Shall Burn and Kataklysm in one amalgamation. I could go over each track individually, but honestly, what I’d suggest is listen to this album in its entirety, you can thank me later.