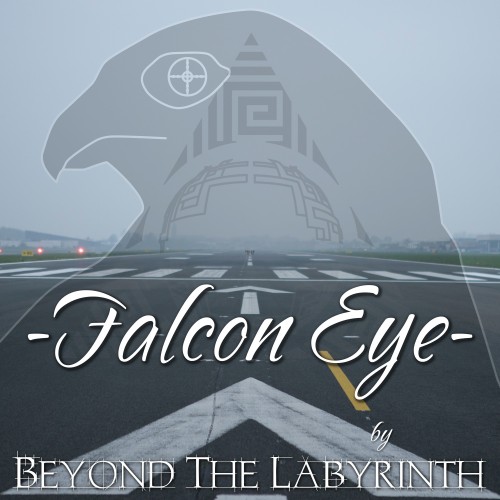 Beyond The Labyrinth is a band that I’ve been following closely for the past 4 years, ever since discovering and reviewing their “The Art Of Resilience” album (one of my favorite releases from 2017, read our review here: https://www.belgianmetalshredder.be/reviews/66). That same year the band started playing live more frequently as well as releasing fresh material more often. And now the band is working on a new album scheduled for release this fall. So let’s shred its first single!

“Falcon Eye” is Beyond The Labyrinth’s first single for their upcoming fifth album “xxV.” The album will be part of Beyond The Labyrinth’s ongoing 25 anniversary campaign during which the band will be releasing both new and previously unreleased audio and video content alongside the aforementioned album. The “Falcon Eye” single is released independently and sent to us by the band members themselves. Aside from “Falcon Eye” itself the single also features a B-side called “Rise Above” which I’ll discuss later in the review.

“Falcon Eye” begins with Beyond The Labyrinth’s typically cheerful keyboards supported by a rumbling bass before the melodic guitar riffs join in and finally Filip’s operatic vocals. The whole song breathes the motivational atmosphere and catchy lyrics that I know and love about Beyond The Labyrinth but I did feel the ending was a bit abrupt. The keyboards, guitars and vocals all intensify but there isn’t quite that big of a payoff. In addition, I feel that the production could be a bit beefier, both songs currently lack a bit of extra sonic power but I’m sure they’ll crank it up when the full release comes around in order to make the new album reach the creative and productive levels from their 2017 masterpiece “The Art Of Resilience.”

“Rise Above” is the single’s B-side and I admit that I like this song even more than the A-side. I love the jazzy saxophone, the 80s pop rock inspired synthesizers, soft beating drums and the intimate feeling that this particular tune evokes along with the powerful chorus sections. The entire song reminds me of Vangelis’s iconic Blade Runner soundtrack.

If you’re familiar with this Belgian rock band’s earlier material then you’ll be instantly up to speed with these 2 new songs. But if you want me to describe Beyond The Labyrinth’s sound more profoundly, I’d describe it as a blend between pop, hard and progressive rock. Take elements from classic acts like Queen, Deep Purple and ABBA and you’ll have a solid idea of what this Belgian band has in store for you. And if dig any of these aforementioned bands then I can certainly recommend you Beyond The Labyrinth.

A foggy airstrip covered by an immense falcon shadow is the main attraction of “Falcon Eye” visual side. I do like the small details in the artwork, like the crosshairs eye of the falcon and the group of people (probably the band members themselves) posing in the far distance. As always with Beyond The Labyrinth’s artwork, the presentation is sober and the band’s triangle logo is once again proudly present.

7,5 falcon shadows out of 10. A solid warmup to Beyond The Labyrinth’s upcoming fifth album, “Falcon Eye” nicely ticks off the band’s usual creative boxes. If you’re already a fan of the band or just a lover of classic 70s and 80s rock then you may certainly check this one out. Here’s “Falcon Eye.”