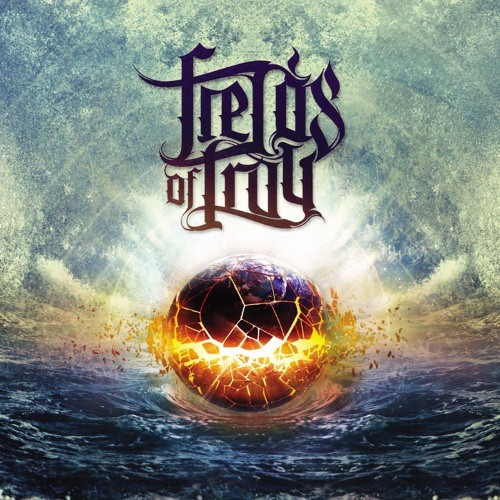 I was introduced to Fields of Troy by the band members themselves. Jürgen, Fields of Troy’s bassist and last remaining founding member, sent me the Hardship EP through Soundcloud and requested me a review. Well, what can I say… Thank you so much for the request, Jürgen! I hope you like the review and that more bands will come to my “office” for requests. All metal and hard rock (plus everything in between) is more than welcome on the site, especially when it's Belgian!

Hardship is the second EP from Fields of Troy, released five years after they debuted in 2011 with Black Rain. The first minute of the EP is a soft, almost dreamy track wherein the band’s guitars and drums slowly start to take over and finally unleash their full fury with the second track, Cold Eyes. I’d describe Fields of Troy’s sound as similar to metal acts from the middle 2000s (at least, that’s how I call the decade wherein I spent my teenage years) such as Alter Bridge, Saliva and Godsmack. The band combines solid, crisp guitar riffs with raw and heavy vocals, similar to the aforementioned bands. However, some tracks on Hardship drastically break away from this new-school rock music. The Passage, Hardship’s sixth track, is a peaceful instrumental with acoustic guitar and piano. The eighth track, By Now, is a power ballad and also features guest vocals by Mayken Hoessen.

Not much to cover here. Since we’re dealing with a modern hard rock inspired band, its themes are down-to-earth, dealing with personal and social issues and the like. Yeah, that’s all I can say, time to check the artwork and… WHAT THE HELL?!

Good old Mother Earth takes a bath in some random ocean and fucking explodes! Really, I don’t know what crack they were smoking when they came up with this artwork but I love it! The front cover has nothing to do with the album’s themes at all but it doesn’t matter. I wouldn’t change it for a dime! And after all, it’s the music that’s important, not the front cover! Speaking about the music…

Sting (not the rock artist or the wrestler, but the track) is my favorite tune of the bunch! The song’s main guitar riff reminds me of Pantera’s Mouth of War. I’m a huge Pantera fan (both their work before and after Cowboys From Hell, mind you), so it was an easy pick. Walk on home, boy!

7 apocalyptic explosions out of 10! With Hardship, Fields of Troy has delivered a nice, explosive EP that will certainly provide a good bang for your buck! And now I’ll stop with that explosive language before my head blows up! Definitely check these bombers out!

Here’s Sting. The seventh track on the Hardship EP. Enjoy and see you soon for another review!