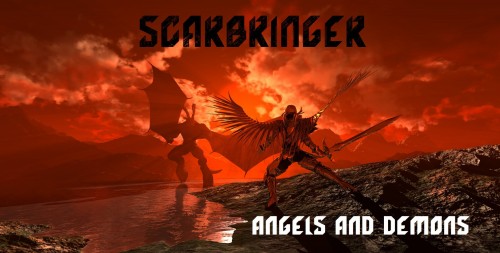 I’ve been aware of Scarbringer’s existence thanks to frontman Thomas who kept me informed about his band’s progress since the band’s inception a couple of years ago. A few days ago he told me his band had publicly released their first single and since I’ve always had an appetite for old-school hard rock & heavy metal I decided to give “Angels And Demons” a listen. And a quick and sweet review!

“Angels And Demons” is the debut single from the Belgian hard rock & heavy metal band Scarbringer. After the rather cheesy wolf howl and Hans Zimmer esque horn the band members invite us to a home-made jam session. What I instantly noticed were the crisp and catchy guitars shortly followed by Thomas’s howling vocals. Speaking about vocals, I like Thomas’s delivery, he has a joyful voice but with a slight tragic undertone. He often gets backed by clean singing from rhythm guitarist Annabel, whose backings give the overall vocals some extra power and dimension. The drums are nicely rhythmic and the bass is deliciously groovy.

One significant weakness I did feel in “Angels And Demons” is the rather weak sounding guitars and the lack of a solid guitar solo. There’s a certain catchiness in the riffs but they sound a bit too far in the background to make them truly stand out. Another point of criticism I’d like to bring up is the song’s overall length. “Angels And Demons” overstays its welcome a bit and lacks some necessary pacing. Personally, I’d add either an aggressive or uplifting guitar solo. Also I’d remove one of the verses (but not the Latin chants, they’re pretty cool) and make the chorus a bit shorter.

That being said, I do for the most part like what I’ve heard so far. “Angels And Demons” has a great main riff that got stuck in my head for a good while, the dual vocals have plenty of personality and the song exhales both an upbeat and dark feel. I’m quite curious to hear more material from this fledging band.

“Angels And Demons” deals with Armageddon, the apocalyptic final battle between the forces of good against the forces of evil. The song is written from a rather neutral perspective, depicting the hellish battlefield. I love the single’s artwork, it reminds of both DOOM and the action adventure RPG Wonder Boy In Monster World (if you’ve ever had a Sega Genesis/Mega Drive you might have heard from that game). The blood-red rocky hellscape with an ironclad, sword-wielding angel facing a huge winged demon, it’s cinematic and badass!

And finally, I’d like to add that I also dig Scarbringer’s mascot a lot. The wolf head’s half-burned face and the bright red eye reminds me of the Terminator, still one of my all-time favorite movie franchises (only the first 2 movies count in my book). It’s a simple but effective band mascot and I hope he’ll be back! But for the moment being, I award this Scarbringer single with…

7 Wolf Terminators out of 10. While lacking in some mixing and songwriting areas, Scarbringer’s debut single is an enjoyable hard rocking metal tune with catchy singing and crisp riffing and a rather original dark power metal atmosphere. Enjoy the single!