I'll have what they're having! 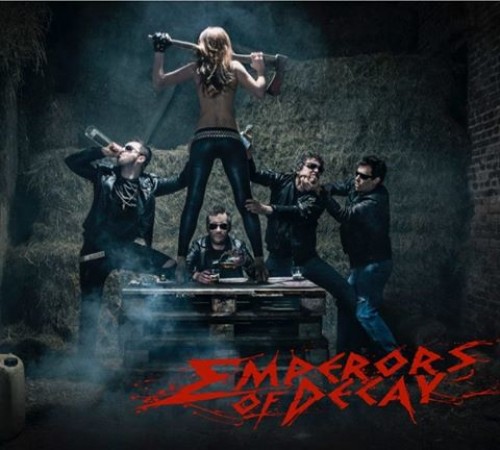 Usually I review bands that I’ve either seen live or that I discover via independent releases that I receive from promoters. In the case of the Emperors of Decay, however, it was Alain, the band’s bassist, who personally presented their freshly produced EP to me through Facebook. In other words, instead of me finding bands to review, it was a band who found me to write a review for them. Anyway, time to return to my usual Shredder modus operandi and take a look at the Emperors of Decay’s debut EP Going Apeshit (no pun intended).

The Emperors of Decay’s mini album adds three tracks to your metal collection. The guys from Leuven clearly show their roots from the get go, going for high-energy, catchy hard rock as bands like Guns N’ Roses, Twisted Sister and W.A.S.P. did in their big haired glory days. Most of the time the vocals are harsh and aggressive. That latter vocal style in particular allows for a nice contrast to the radio friendly guitar riffs. And the songs’ lyrics add even more edginess to the overall package. Let’s talk about those lyrics now!

On the front cover we see the band members hanging out in a barn with a topless, axe-wielding blond bimbo facing towards them (And not towards the camera? Too bad!). I do love how the guy sitting in the middle of the picture is casually refilling his glass with whisky instead of fighting for the girl like the other guys on the picture do. Maybe he’s gay, or maybe he effortlessly takes such beautiful women to his bed all the time! The Macho Man inside of me believes it’s the latter case! Anyway, it’s a cool cover, reflecting the wild and outrageous attitude the band shows in their music.

The EP’s second track, Heavy Metal Overdose, gets the win. It has a great guitar riff and a chorus that’s very tempting to sing along to. I also like the little twist at the final part of the song when the musical style changes from happy and energetic to angry and fierce. It’s like listening to Motörhead only to suddenly switch to Pantera. A great honorable mention goes to the EP’s final track, Mad Demon. It’s the only song on the menu that features a guitar solo and it’s a magnificent one. A bit of a shame that the other two tracks don’t feature such solos. Hopefully the Emperors of Decay will add some of that in their future songs.

8 whisky soaked axe slashes out of 10. If the Emperors of Decay’s quickly expanding repertoire of achievements such as becoming first place in contests like 2011’s Alcatraz Metal Festival Band Clash and 2013’s Red Bull Redroom Jam doesn’t convince you of their potential, then this EP will more than certainly bring you over. The band’s combination of classic hard rock with harsh modern metal music makes their sound both accessible to regular music fans and heavy enough for the full-blown headbanger. Another band to put on the Shredder’s list and for you to check out! And in case you’re wondering what I meant with “I’ll have what they’re having,” well, a fucking Heavy Metal Overdose. And nothing else, trust me, really nothing else. (Looks at front cover again) Damn, I’m bad at lying.

Note: the track here below is not included in the EP release, however Alain confirmed to me that Buzz Ride will be included in an upcoming full-length release. That being said, enjoy the song!
Buzz Ride - Emperors of Decay