This is extremely dangerous to our democracy. 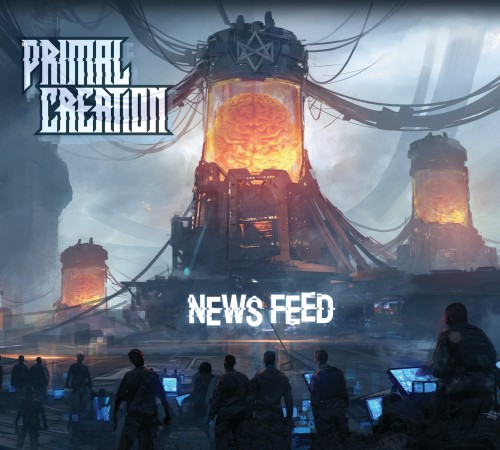 For the past 4 years I’ve been keeping my Shredder claws focused on the Belgian progressive thrash & death metal band Primal Creation. That year I shredded their solid debut album “Demockracy” (read that review: https://www.belgianmetalshredder.be/reviews/70) and 2 years later the band won the 2019 Wacken Metal Battle Belgium. Earlier this year the band had announced their second full-length release, “News Feed” and last month I had already written a review of the album’s debut single “Please Disperse” and now, as promised, it’s time to review the full package!

“News Feed” is the second album from the Belgian prog thrash metal band Primal Creation and is a follow-up to their 2017 full-length “Demockracy.” Like its predecessor, “News Feed” is an independent release sent to us by our Dutch comrades called Hard Life Promotion!

The album commences with the short intro “Extremely Dangerous” in which a droning guitar riff and a ton of frantic worldwide news chatter fills the airwaves with quotes that certain (social) media outlets are considered “extremely dangerous to our democracy.” Then Primal Creation starts off the release for real with “Post-Truth Order,” an extremely aggressive track with drilling guitars, hectic drums, sharp bass and shouting vocals with occasional cooldowns. The whole song has a classic Metallica feel but with a more punk-rock aesthetic and eventually ends in a lengthy instrumental part with menacing yet melodic guitars. An excellent, mosh-pit opening tune!

Next up is the single “Please Disperse,” a song which I had already reviewed in an earlier review (check it out: https://www.belgianmetalshredder.be/reviews/276). It’s a typical Primal Creation song that features all of the positive stuff from their already solid debut album. Melodic, bass-fueled thrash riffs with both clean and harsh vocals and plenty of sudden but welcome tempo changes. Then comes “Vial Play,” a song that Primal Creation has already released a whole year before the release of “News Feed” but now features improved production quality. “Vial Play” itself is a vicious track with roaring guitars and growling vocal deliveries, excellent for some intense headbanging!

Then comes the fifth track on “News Feed” which is called “Antillectual Disease.” A faster and more melodic song that’s full of anarchic energy despite its relatively long runtime. “Follow The Reader” opens with an epic guitar solo and then continues into an old-school death metal tune with thrash elements and catchy lyrics. Up next is “Watch It Burn,” a bashing thrash beat whose guitar solos play alongside rough yet clear singing and smashing drums. “Lie/Share/Subscribe” is the album’s most recently released single and I really like this particular song’s heavy march beats and the overall menacing atmosphere. And finally there’s “The Daily Noose,” a track which, similar to the earlier “Post-Truth Order” features hectic moshing beats (after a threatening buildup) and serves as a very suitable ending to the entire album.

Overall, Primal Creation’s “News Feed” features many of the traits from the earlier “Demockracy” release. A blend of thrash, death and progressive metal with both harsh and clean vocals, distorted and melodic guitars & various rhythm and atmosphere changes. It makes Primal Creation’s sound interesting, energetic and unpredictable. The biggest change in this new album, however, is the improved production. Everything in “News Feed” sounds clearer and heavier which of course makes Primal Creation’s strengths much more prominent. A logic and positive evolution compared to “Demockracy” and it makes the band’s studio sound and feel more in line with the band’s live sound and feel (which is excellent, BTW, the band rocks live on stage).

Just as in their earlier “Demockrazy” release, Primal Creation’s material is entirely aimed at contemporary political and social issues. In “News Feed,” Primal Creation focuses on the ongoing infodemic wherein people get news (both legit and fake) from countless (social) media sources. Primal Creation’s message is to be careful with the “information” you’re getting, especially when it’s coming from narcissistic demagogues whose sole aim is to spread messages of fear, violence and hatred to everyone who’s listening and so increasing their own political power.

“News Feed” artwork features a futuristic and dark image of several brains imprisoned in glass pods and who’re being fed news messages via tubes and wires, controlled by a group of people with computer terminals. I really like the album’s artwork as it’s colorful and grim and it reminds me a lot of the Matrix films. Welcome to the real world!

My personal top picks on “News Feed” include the powerful opener “Post-Truth Order,” the energetic “Antillectual Disease,” the marching beats of “Lie/Share/Subscribe” and the pounding finale called “The Daily Noose.”

Personally, I believe that Primal Creation’s songs can still be written a bit tighter. In particular songs like “Vial Play” and “Watch It Burn” would certainly have been better off with a slight 30 second runtime cut. And after hearing the short and beautiful instrumental “Memories…” in the earlier album I do miss a lengthy, epic instrumental track in this new Primal Creation album. But after all’s said and done, let’s give this release…

8 news outlets out of 10. If you enjoyed Primal Creation’s previous album then their new album will satisfy you even more. Thanks to News Feed’s improved production, the band’s delicate blend of thrash, death and prog metal now tastes better than ever! Now please “Lie/Share/Subscribe!”