The art of prog 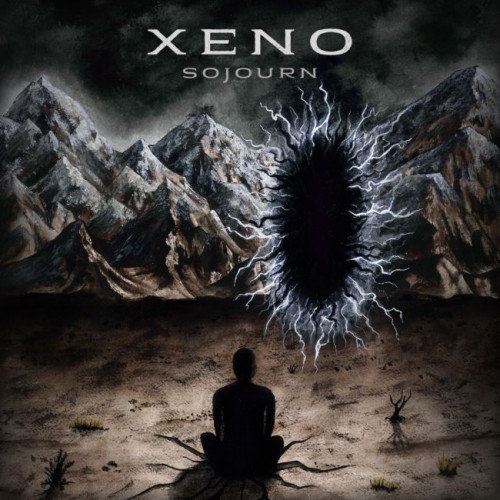 Dutch progressive metal band Xeno states their own cited influences as Periphery, Tesseract, Opeth, Plini, Pocupine Tree, and some good old Lamb Of God. The band have been active for quite some years now. Founded in 2008 under the name Semiazas, the band has gone through multiple style and member changes. In 2016, they released their first album under the monniker “Xeno,” called “Atlas Construct.” It was praised for the band's huge potential and their unique sound.

Fast forward to the 30th of October 2020, when Xeno releases their second album “Sojourn.” The album is a result of a two-year writing session with their latest lineup. This has resulted in a combination of a lot of fresh ideas, whilst still maintaining their signature sound. “Sojourn” is released by Spanish record label Art Gates Records and sent to us by Hard Life Promotion. This album is my first introduction to the band. So let's find out what all the fuss is about.

The album starts with “Revery,” it's an intrumental track that leads straight into the second track “In Stasis.” This one starts with a jazzy intro, which combined with the vocals, give me a bit of Porcupine Tree vibe. The vocal delivery by guitarist/vocalist Edwin Haan in the chorus reminds me of Depeche Mode. At the end of the track bassist/vocalist Ruben Willemsen joins in with his screams and grunts. “Dusk” starts off with a Djenty riff. Whereas the previous track was Edwin’s moment to shine, here it’s Ruben who steals the show. The combination grunts and cleans work very well. In the middle we get some rest with a keyboard part. The bass gets dimmed to give the keys their time to shine.

“Epiphany” could have been a missing Tesseract song. Lots of polyrythms, subtle guitar and keys. No wonder they chose this as their first video. It's the ideal track to introduce new people to Xeno. At first glance it looks like a straightforward song, but there's so much going on. It ends beautifully with keys and guitar. With “Exile” and “Nomad,” the band shows off their metal roots. The bands that enter my mind in these particular tracks are Lamb of God and Gojira. Is that bad? Certainly not! These tracks feature no clean vocals at all and drummer Lars van Mourik shows his diversity by giving the big riffs the foundation they need. The keys in the background give these tracks some extra dimension.

After all the brutality, we get treated to a little interlude called “Memories.” Sweeping post-rock style guitars featuring spoken word. The birdsongs in the background make it easy to dream away. The sounds of crashing waves pulls us into the next song “Closure.” The song starts with keys and bass, adding subtle drums and guitars. After a buildup the songs burst out in a big chorus. Near the end of the song we get a beautiful guitar solo. “Resurge” starts off with blast beats, before leading us in a different direction with some samba-esque parts, only to get back to the harder bits. The transitions are well done. “Uncaged” follows the same routine, but with more emphasis on the heavier parts.

“Sojourn” is a perfect ending track, where the band shows off all their strong points is a 13+ minute song. The dreamy landscapes, the brutal riffs, the playfull guitar parts, it's all there! The fact that it sounds like a consistant track makes it even more impressive. At the end of the track, the band goes into a full-on death/black mode, and we get introduced to some Ihsahn-style vocals. A sudden departure in style, but somehow it makes sense. The repise of the first track at the end tells us the ride is over. And what a ride it was!

The album art shows a sillhouetted person sitting in a barren landscape with mountains in the background. It looks like there are some roots beneath the person. The person is staring into an open portal. To me personally, it gives off some Lovecraftian vibes, which I don’t get from the music at all. It might all have some deeper meaning. The landscape may be the sojourn, meaning temporary residence. And the portal is a way to escape to a better place. I really like that the band did not use the same watercolour and geometrical artwork we see so much in their genre.

The album is so complex and detailed that I feel like my review doesn't do it all the justice it deserves. This is an album that demands your attention and lets you discover something new behind every corner. The attention to detail in the music is outstanding. As a bass player myself, I'm amazed by the rhythm section, and how they contribute to the rest of the music. While I recognize the bands they are infuenced by, I can still hear that this is distinctly Xeno.

Standout tracks to me are “Epiphany” and “Sojourn.” The first, because it grabs you immediately. The last, because it shows everything the band has to offer. While I have a lot of praise for the music, I'd like to see more vocal experimentation in the future. Personally, my favorite vocal parts are those featuring both vocalists.

I give this album an 8 out of 10 score. If you're a fan of progressive death metal, then this new Xeno album is a must listen. I can't wait to see these guys live, once our current state of living is sorted. Meanwhile, you can enjoy the “Epiphany” video!