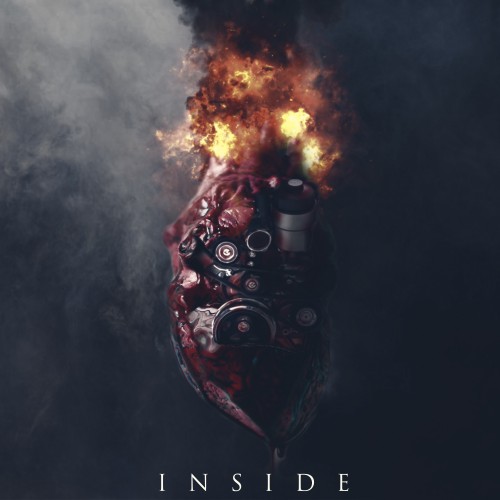 Before receiving the “Inside” EP from Stijn, I had never heard of the Russian progressive metalcore act Next Door to Heaven. As a taster, the Belgian Metal Shredder had sent me the YouTube link to “Dance With Me,” a song that pulled me in with its quirky drums, meandering vocals and interesting music video. So I was eager to get started on this 2021 release. “Inside” is released independently and sent to us by Asher Media Relations.

Next Door to Heaven certainly has a lot of experience: between 2 albums and 4 EPs, this band has been around the block and back again. When I first heard them, I was reminded of Tesseract. The distinctly prog guitars and clean vocals evoke the same sort of dreamy violence.

However, where Daniel Thompkins puts a lot of variety and vocal range into Tesseract songs, I found vocalist and lyric writer Daria sticking to the safer routes. The lyrics for the “Inside” EP are interesting and philosophize on the state of life and her role as a human, which I can definitely relate to. Her words provide a lot of food for thought and I like the journey she takes me on. But when it comes to vocal lines, I kept waiting for her to break out of her comfort zone. I’m definitely not saying Daria is a bad singer, far from it, but it all felt very same-same. Personally, I would've welcomed some experimentation, maybe with some distortion or screams.

Guitarist Gene had a lot of work on this EP, taking care of guitars and bass as well as arrangement and orchestration. The drums were handed over to Pavel, who does his job admirably. Musically, this is not a bad band, though, again, I would have liked for them to break out of the comfortable mold. Listening to their back catalogue before reviewing this EP, I was struck by how many different genres the band tried to touch upon. Yet for this “Inside” EP, NDTH sticks to the familiar to produce a listenable, but generally generic-sounding prog album. Not a bad release, just a little dime-a-dozen.

When talking about the artwork, vocalist Daria states: “Conceptually, the general idea of the EP is a fight between a human and a machine and a master/obeying inside one person. If you look at the cover art you will see a heart combined with a car engine in the moment of ignition.”   The art is well done, the heart and engine clearly define in the image. The flames coming out of the top could refer to the burning of gasoline to keep going, or burning the heart to be able to survive in this world. Of course, that’s what I made of it, it’s up to you to form your own opinion.

My favorite track of this EP would be “Unleash the Beasts.” To me, this song portrays the band at its finest. The music is varied, dreamy and catchy. Daria takes us to the core of her being: admitting that she sold herself short for too long and now she's breaking free by “unleashing the beasts.” And let’s face it, a lot of us suffer from that particular affliction. We get told to be good and to behave, to be modest and to not reach our full potential. Daria stands up and reclaims her own self. A powerful message in a six-minute song. The other tracks are pretty good, covering a variety of topics and both lyrically and musically solid. The last track of the EP “Flare Up” features guest vocals from Lord Nelson (ex-Stuck Mojo), not a small name in the music business. But while getting him was a coup for the band, it didn’t feel like his vocals added a lot to the song. His talents might have been better used in a different way, maybe more in a duet style, with Daria and Lord Nelson taking turns singing and rapping various parts of the song.

I would give Next Door to Heaven’s EP Inside a 6/10. While I might seem harsh in my review, it’s a good EP overall. I listened to it quite a bit before writing this review and I never got to the point where I found it boring or bad. The quality of the recording and the musicians doesn’t allow for that. But I do expect more from a band with potential like this one. More vocal range, more variety in the riffs, more… something. But in time, I’m sure they can get it right. Here’s a teaser!