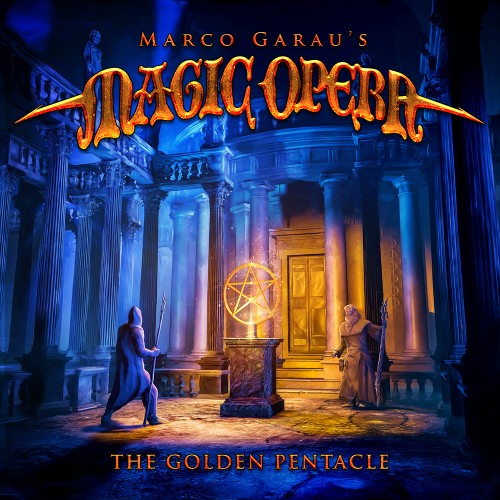 We got personally contacted by Marco Garau to check out his recently founded solo project Magic Opera. Since I’ve got a huge appetite for symphonic orchestral power stuff I couldn’t resist the temptation to shred Marco’s first album as Magic Opera into a review! “The Golden Pentacle” is an independent release.

The opening track of this album is The Golden Pentacle title track. This song begins very slow and rhythmic and gets fast and bombastic very quickly. It feels very powerful and rhythmic and makes for a good intro to the album that in its entirety is a very powerful full-length release. The second song is the “Elixir of Life” and continues in the same pace as “The Golden Pentacle” and rocks in a very energic way. The instrumental part is very calming and still refreshing and on tempo. This pace is like this because this song is guitar driven.

As the album's third track comes “Keepers of the Night”. This song really gives me a Queen feel, with the up-tempo, happy and lighthearted tune that is similar to some Queen songs. It also has a medieval vibe from the jesters and the freakshows of old, this in the best way because of the positivity in this song. “Never-Ending Pain” is a more brutal song with raw vocals, this fits the theme that this tune has. The tempo of this song is a bit higher in the beginning and the end but slows down in the middle of the tune with the instrumental tango part. The ending of the song almost feels like the music to an adventure video game.

Next up is “Fight For The Victory” this track starts off completely instrumental and Anton’s vocals come in as a complete surprise. This makes this song a tad mysterious to then develop into a rhythmic song that’s very drum driven. The sixth song “The Secret Of The Sea” starts with some bombastic vocals to then proceed to a true power metal song, with the keyboards that make the basis of the melody. The pace goes up and down like the waves and winds of the sea.

Then comes “The Sacred Legacy”, the longest song from this album. Once again this tune has a medieval theme and feel, but on the other hand it is quite opera like and powerful. It’s a song in the same way as the rest of the album. Then comes “Free Again” a more guitar-driven fast song. It’s also the shortest song of the album, so it’s not only a quick pace but also a song that’s done quickly in retrospect to the other songs. This tune’s riff really rocks my boat, it’s powerful and bombastic.

The ninth song “The Other Side” is a very melodic song with a nice and balanced ballad. This song is a medium length track that’s very sweet but still powerful. This ballad is a perfectly balanced tune that really gives you a cooldown before the album’s two last songs. Next up is “Thief Of Souls”, this song is once again a true power tune with a slight hint of Metallica and Sabaton in the solo. It has a very high tempo that perfectly leads up to the last song which is, last but not least is “Until The End Of Time” this song is a very varied song with powerful but sleek melodies and is a real conclusion of the album with a bit from every song. And like this “The Golden Pentacle” album ends with a big bang!

This Magic Opera concept album is exactly what I love in symphonic power metal, the soaring vocals with the very atmospheric guitars & keyboards and the subtly present but still roaring drums. It really is an epic power metal album with a dynamic that rocks all day round. This album will be enjoyed by fans of Queen’s “Innuendo,” Nightwish’s “Human//Nature” and Memories Of Old’s “The Zeramin Game.” Well-recommended! Here’s “Free Again!”