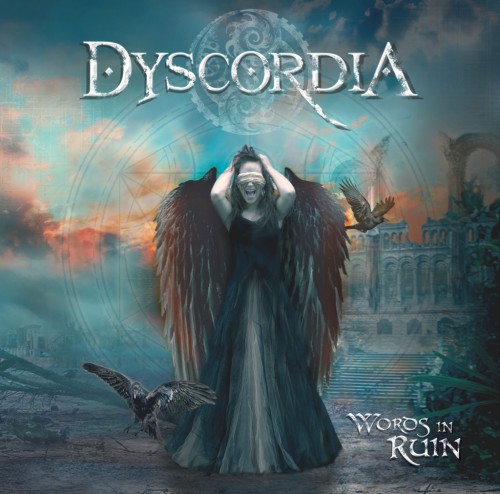 Although Dyscordia is a well-established name in the Belgian metal scene I didn’t hear any of their songs up till the moment I received Words In Ruin from Hard Life Promotion. And once again I’m very glad that Mike has sent me this album, because it’s yet another awesome piece of Belgian metal. Enough introductory filler, here we go!

Words in Ruin is Dyscordia’s second full-length release. It’s produced by Road Mark Productions and distributed by Suburban. After a bombastic opening instrumental, Dyscordia kicks it into high gear for the following tracks, combining epic, Iron Maiden inspired metal with edgier riffs you could expect from a band like Pantera. You’ll find both high-pitched, classic metal vocals and death metal grunts, melodic guitar solos mixed with some good old unsophisticated shredding. It’s all here, and in most songs these styles go hand in hand. There are a few exceptions, however, as tracks like Words of Fortune and Sacred Soil of Souls are slower and more dramatic in style. The vocals are also less energetic and tend more towards sadness. And finally these two songs feature other instruments like acoustic guitar and piano which the other tracks on the album don’t include. I believe the description above proves clearly enough that Dyscordia’s Words in Ruin’s eleven tracks offer a ton of variety! I’m fully confident that there will be at least one track on Words In Ruin that will suit your headbanging desires! All right, time to talk about some other elements of the album…

Words of Ruin’s combination of high-energy riffs mixed with darker, heavier material is also reflected in the album’s themes. Songs like A Perfect Day and Reveries have pretty optimistic topics. The former, for instance, is about waking up in the morning to start a new, productive day! A simple, yet effective subject for an awesome track. Other songs like Bail Me Out and Never Will feature grittier themes, dealing with physical and/or mental imprisonment and the casualties of war respectively.

Dyscordia have taken the concept of Words in Ruin quite literally since the band’s name and album title are presented in front of a ruined city! There’s also a black winged, blind-folded angel yelling towards the camera! Maybe it’s Lady Justice, who has exchanged her balance and sword for a pair of wings and now regrets the decision. Or maybe she’s just having a bad hair day! Anyway…

This time, the honor goes to A Perfect Day, the fifth track on Words In Ruin. It’s the fastest track on the album with the entire band putting their entire metal ferocity into the song. The vocals are easy to sing along to, the riffs make me feel like I’m riding a rollercoaster and the drums make me pound my head from sheer intensity! Another big favorite of mine is the album’s penultimate track, Words of Fortune. Although the song’s story is about the narrator lying on his deathbed and spending his final moments with his loved one, the song isn’t as sad as you might expect. The track may begin with a melancholic classic guitar and end with an equally melancholic piano melody, but in the middle part the song gets more intense and almost optimistic, with the vocalist telling his friend not to be afraid of losing him to the hands of death. He evens growls towards death, showing his full physical and mental preparation to enter the hereafter! A powerful and compelling track and a more than fitting end to the album’s main tracks. A very honorable mention goes to Harlequin’s Grief. Alongside the short, preceding opening instrumental track Templum Creationis this song does exactly what a perfect introduction tune should do! Offering you an accurate representation of what the band and album have in store for you, getting you all pumped up and begging for more!

9 blindfolded angels out of 10. Dyscordia’s Words in Ruin feels like entering your favorite rollercoaster. It’s an intense ride, with an occasional slowdown to catch your breath only to instantly go into full-throttle once more! And like every good rollercoaster, you can’t help but jump back in line for another ride. Highly recommended!

Here’s the music video of Chthonic Star, the ninth track of Words In Ruin.