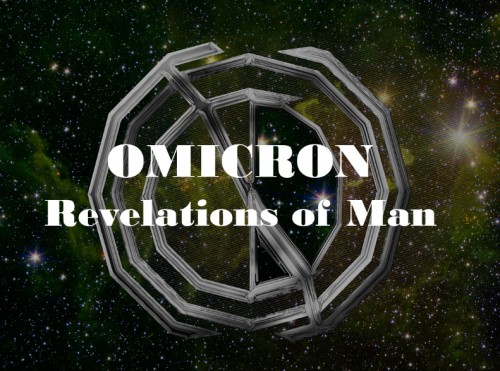 Last September we got personally contacted by Omicron’s founding father Philippe to check out the pre-production versions of his current Omicron songs. I gave him my thoughts about the material as it was back then and now, some months later, he informed us about the release of the debut Omicron single “Revelations Of Man.” Well, in for a penny, in for a pound. In for a shred that is!

After a short orchestral opening vocalist Corin starts whispering about how we believe everything is all right while things aren’t OK at all! As soon as she reaches that conclusion, the rest of the band starts shredding and banging to a metallic riff while Corin herself turns her gentle voice from earlier into a harsh grunt. Then the song turns back to melodic and clean and so it progresses on, switching between soft and moody & heavy and aggressive until the soothing bass driven end.

While the whole package still requires some additional power and finesse, I do feel some genuine positive traits in this first Omicron song. I like Corin’s flexible vocal range (her cleans remind me of Splendidula and her grunts of Spoil Engine) as well as the elements the band has taken from symphonic, doom and death metal. It’s a pretty varied song which exhales a genuinely brooding atmosphere and finally I enjoy the philosophical message behind “Revelations Of Man.” It deals with mankind’s self-destructive tendencies and overall depressive and cynical attitude towards the world and life and this mentality prevents us from reaching our full, beautiful potential. All things considered, I’m looking forward to see, hear and feel how Omicron’s dreary setting will be like when it’s live on stage.

No artwork for the single itself, but I can offer my opinion about the band’s logo so no sweat! Omicron’s logo features the Greek letter from which the band borrows its name from. The omicron sign is multilayered and the whole thing is shaped like a metallic clock but the logo’s bright silver coloring does give it bit of a plastic look. Personally, I think the logo will look better in a darker shade of silver. But in any case, I’m curious to see how the band’s look, feel and sound will evolve over the coming months.

6 Greek letters out of 10. While Omicron’s overall sound still needs some extra pepper and smoother pacing, the band’s cocktail of orchestra, grinding riffs, philosophical themes and vocal flexibility featured in this debut single does spark my interest. Enjoy the single.