All that glitters is gold 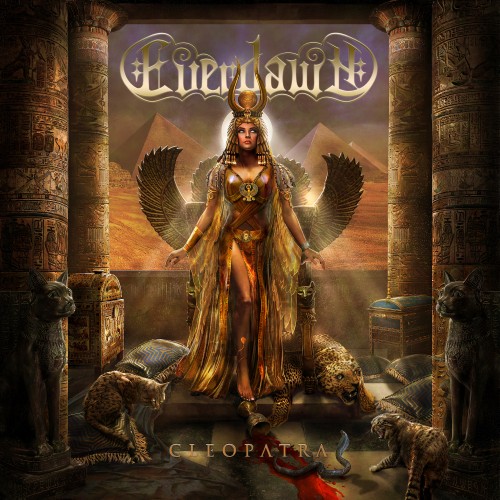 I received a Bandcamp download code from my good friend and longtime business partner Mike De Coene from Hard Life Promotion to download the new album from the American progressive symphonic metal band Everdawn! Although I didn’t hear of this particular band before, symphonic metal has always been one of my favorite metal subgenres so I decided to give this one spin. And a shred. And a review.

“Cleopatra” is the second album from the New Jersey progressive symphonic metal band Everdawn, formerly known as Midnight Eternal (who released their eponymous debut album in 2016). “Cleopatra” is released via American rock label Sensory Records (a subsidiary of The Laser’s Edge label) and we received a download code from Hard Life Promotion.

The album begins with “Ghost Shadow Requiem” and I immediately noticed the guitar-driven aspect of the band’s sound along with Tarja esque Nightwish vocals. While it’s an enjoyable opening track thanks to the prog guitars and symphonic singing, I do feel it overstays its welcome and would’ve been better off with a minute or two less runtime. Next up is the more classic symphonic tune “Stranded In Bangalore” and I must say this served as a better introduction to Everdawn thanks to its catchy lyrics, powerful orchestrations and vocals and topped off with a beautiful guitar solo. Then comes the album’s title track, a similar prog power symphony track as the previous one, but with plenty of ancient Egyptian motifs and classic Nightwish influences.

“Your Majesty Sadness,” as the title suggests, has a tragic atmosphere created by the slow and heavy instrumentation and the mournful vocal delivery (further amplified by the guest singing from Therion’s tenor Thomas Vikström). The album’s next track is called “Infinity Divine” and is a more upbeat song while “Pariah’s Revenge” is a great tune thanks to the highly operatic vocals backed by the fast electronic tunes and sharp guitar riffs. “Lucid Dream” is another sweet tune with a very effective dynamic between the keyboards and guitars which results in a great symphonic power melody, not to mention some of vocalist Alina’s best deliveries on the entire album.

Next up is another rock solid track called “Heart Of A Lion” and then the band cuts to the instrumental “Toledo 712 AD” which features some more Egyptian inspired tunes along with some roaring guitars and pounding drums. Then there’s the catchy guitar jammer “Rider Of The Storm” and finally Everdawn wraps up the album with “The Last Eden.” A satisfying ending to the album with one last set of epic guitar solos, intimate interludes and energetic singing.

In my opinion, Everdawn’s main strengths are the technical prog & power guitars and keyboards along with the classic symphonic metal vocals. When the band plays to those aforementioned traits they deliver a streamlined yet powerful sound that evokes a lot of positive feelings within me. But in some songs the band lacks some of that aforementioned power and other tunes are just too long for their own good. That been said, however, the good in “Cleopatra” certainly outweighs the bad and said good is well spread throughout the album. All things considered, Everdawn certainly is a band that I’m going to keep my Shredder eyes and claws on for the foreseeable future.

On the cover art is the Queen of the Nile of whom the album is named after, wearing a gold-plated crown and armor as the sun shines brightly behind her head. Add to that the pyramids, the cat-like animals and the hieroglyphic-covered pillars and you’ve got yourself quite a majestic cover. Personally, I love ancient Egyptian culture and I must also admit that the artwork of “Cleopatra” reminds me of the iconic Iron Maiden album “Powerslave!”

My favorites include the dramatic “Your Majesty Sadness,” the orchestral “Pariah’s Revenge,” the dynamics of “Lucid Dream” and the catchy jams of “Rider Of The Storm” but my big favorite on this album has to be “Stranded In Bangalore.” A beauty of a symphony that would’ve been a better opening tune than what Everdawn had chosen instead.

Weaker tracks are the quite bland “Infinity Divine” and the overly lengthy opening track “Ghost Shadow Requiem.” If those tracks lost some length and gained some juice then this album would’ve received an even higher score. But still, I’m satisfied enough to give Everdawn’s “Cleopatra”…

7,5 gilded Cleopatras out of 10. While a bit too dragged out in some areas, the whole of Everdawn’s “Cleopatra” is an enjoyable symphonic prog experience featuring plenty of excellent guitar, keyboard and vocal work. If you enjoy classic Nightwish then give this band a try. Here’s “Your Majesty Sadness” featuring Therion’s Thomas Vikström.