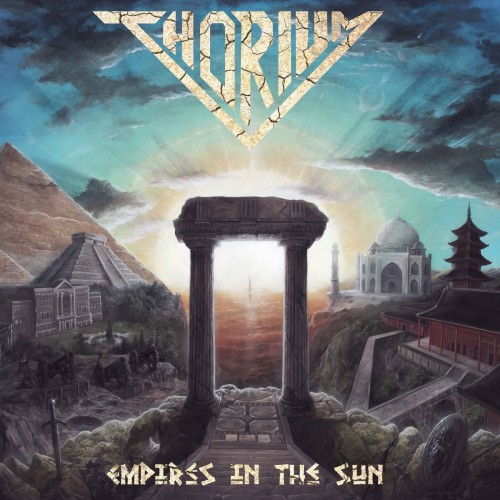 One of the bands I had the most fun to shred through in 2018 was the Belgian heavy metal band Thorium. I remember 3 of its band members from their days at Ostrogoth and therefore I was quick to shred the excellent debut album they had released that same year (read our review: https://belgianmetalshredder.be/reviews/89). Recently I’ve reviewed the single “Where Do We Go” as a preview for their new album “Empires In The Sun” and now it’s time to shred my way through the entire release.

“Empires In The Sun” is the second album from the Belgian classic metal band Thorium and succeeds their 2018 eponymous full-length debut. This album is released via Dutch record label Freya Records and, like the previous album, is sent to us by Hard Life Promotion.

The album begins with a gentle acoustic intro called “Dreams of Empire (a Pastorale)” which also has some clapping before the release kicks off for real with “Exquisite,” a ripper of a tune that reminds me of the song “Ostrogoth” from the previous album, albeit a bit faster and heavier. Next up is “Power and Arms II,” a sequel to the song from the self-titled debut and featuring similar melodies and lyrics but this time, it all feels just slightly more epic. Then comes “Where Do We Go,” a very upbeat tune with a deep philosophical message and which I’ve reviewed in more detail in this single review (https://www.belgianmetalshredder.be/reviews/262).

“More Than Meets The Eye” is a slower and more aggressive song in which the heavy bass and angry vocals are very apparent. The whole song also has a tragic atmosphere and deals with the omnipotent and all-destructive power of time. Then comes the title track for “Empires In The Sun” a twofaced tune that opens with upbeat guitars but turns towards marching beats towards the middle and then a quiet, reminiscing part before building up to a powerful climax. “Old Generation” is a fast rocking tune that celebrates the legacies of the generations that came before us. “Winterfall” begins as a relaxed tune but it does gets more intense as the song progresses and it features some of vocalist David’s most Rob Halford like shrieks. “Itching and Aching (Dead-Eyed Society)” is the most frantic song on the album and it’s a tune that will cause some good headbanging and moshing when played live (something I really look forward to).

Then comes the album’s 3-track finale, beginning with “1302 The Minstrel Part I,” a soft medieval bard inspired intro with acoustic guitar and a multitude of chilled out singing voices. Then comes the main event, the 13-minute track “1302 The Golden Shadow.” It begins with powerful riffs and energetic vocals and beats as troops from both sides march towards the Battle of the Golden Spurs. The song gradually gets faster and more aggressive (especially when Evil Invaders’ frontman Joe Van Audenhove comes in to provide his usual raging vocals) before the battle suddenly ends in silence and peace. Then the song continues into different sections of powerful metal electricity and soothing acoustic sections. Finally the album ends with another acoustic bard inspired tune, “1302 The Minstrel Part II” as the narrator looks back at the bloody battle that had passed in the previous track.

All in all, Thorium’s new album doesn’t change much to the band’s already established and successful formula. The band plays classic metal mainly influenced by Ostrogoth and other iconic old-school acts like Iron Maiden and Judas Priest. Thorium’s main arsenal include operatic vocals, a high emphasis on bass, fast drums and tons of epic guitar solos. The main differences between “Empires In The Sun” and the eponymous debut are the beefed up production and the tighter songwriting. As a result, Thorium’s main strengths are more prominent and this thus leads to a more grandiose final product. If you’ve enjoyed Thorium’s debut, then you own it to yourself to check out this sequel!

The whole concept of “Empires In The Sun” is the rise and fall of civilizations through time and the album’s majestic artwork reflects that as well, featuring various historic monuments from all over the world including the Taj Mahal, Chitzen Itza, the Porcelain Tower and the Pyramids. The artwork as a whole could fit very well as cover art for a Civilization game. Can you build a civilization that can stand the time of time? Maybe, it takes just… one… more… turn!

I really love tracks like “Exquisite” (full of power and energy, exactly what an opener should be) “Empires In The Sun” (its riffs make me imagine a mighty empire rising up and marching towards the rest of the world), “Where Do We Go” (I love its philosophical themes) and finally “1302 – The Golden Shadow” (a mammoth of a multifaceted track with many different sections and atmospheres as well as suitable guest vocals).

Is there anything I still wish there was in “Empires Of The Sun?” Not much actually, I do really like the guest vocalists in the Golden Shadow song and I hope they’ll further expand the guest vocalist roster in future Thorium releases.

9 civilizations out of 10. This new Thorium album takes all the great traits from their previous album and further amplifies everything to an even more ambitious and epic level. If you enjoy old-school metal from the likes of Iron Maiden or Ostrogoth then this release is more than warmly recommended! Here’s the title track.