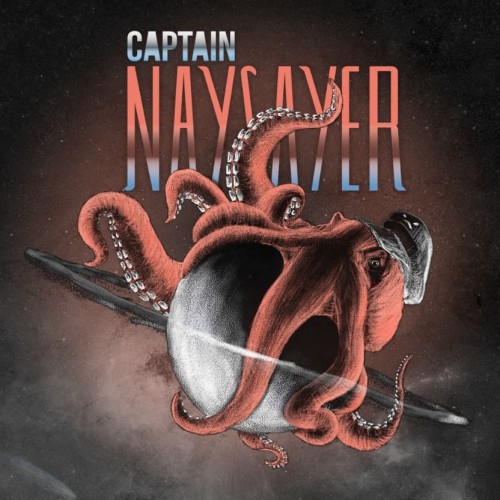 I’ve always had a soft spot for 1970s hard rock with acts like Deep Purple, Led Zeppelin and AC/DC being among my favorite bands from that era. And if my metal shredding journey has taught me anything, it is that there are still young bands out there looking to bring back these old-school vibes to the masses of today. And so does Captain Naysayer, let’s shred their debut EP into one eight-legged review!

“Captain Naysayer” is the eponymous debut EP from the Belgian/Brazillian hard rock act Captain Naysayer. It’s an independent release sent to us by our ever-loyal friends over at Hard Life Promotion. This 6-track EP begins with “Captain Silhouette.” After a short psychedelic opening the band kicks in with a soft yet very rhythmic drum beat, joyful guitars and keyboards and high-pitched vocals. The whole song breathes a kinky, Deep Purple like atmosphere.

Next up is “Changes,” a song with a huge Aerosmith vibe. It’s a fun, chilled-out tune whose main attraction is the awesome ending guitar solo that reminds me of Led Zeppelin. Then comes “Voodoo Lovin,” a song that has a slow and seemingly relaxed beginning that eventually gets faster and more aggressive until it becomes a barrage of keyboards, guitars, drums and saxophones and ending with an epic scream from vocalist Arthur.

The EP’s fourth track, “I See Danger,” is a nice swinging track with another set of sweet high-pitched vocal deliveries. “Blue-Eyed Mask” functions as a intimate cooldown song with soft piano tunes and equally gentle singing but with frequent bursts of explosive riffs and keyboards. Finally, the eponymous EP ends with the single “Living Again.” A fast and energetic tune with plenty of crisp bass lines and catchy lyrics.

There isn’t much left to tell about Captain Naysayer’s sound. Its main elements are juicy guitars, groovy bass, jumpy drums, naturally high vocals and upbeat keyboards. I’d describe the band’s style is mostly reminiscent of Deep Purple for their heavy use of keyboards as well as Aerosmith in terms of guitars, vocals and overall songwriting.

Captain Naysayer’s debut EP’s cover art, like its overall music style, takes its cue from 1970s pop culture movies with a weird and colorful sci-fi image of a capped octopus clinging on to Saturn and the band’s logo in big metallic letters. The EP’s themes are also very similar to the topics those iconic 1970s bands have written songs about, love, seduction, betrayal and standing up to authority.

My favorites on the EP include “Black Silhouette” for its infectious drum/keyboard combo, “Voodoo Lovin” thanks to its catchy chorus and delivery, “Blue-Eyed Mask” as it’s a very atmospheric tune. The other tracks are quite good as well, but they don’t quite click as much with me as the aformentioned songs. In any case, I’m wrapping up this review with…