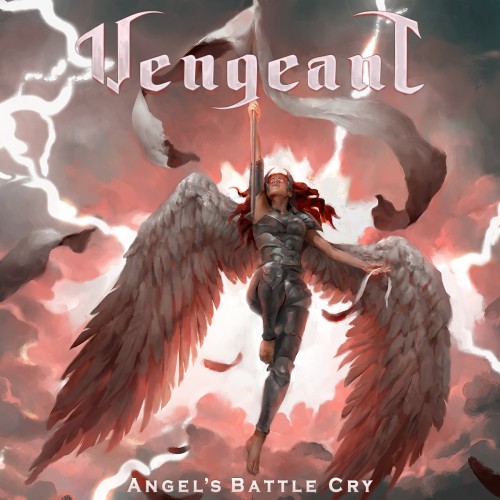 While preparing the February 26th/March 1st 2021 episode of BMS ON AIR I was  looking for a suitable band to be played right after the American symphonic metal band Everdawn. And my eye dropped on this debut single from the Swedish metal band Vengeant. And after listening to this single, I instantly felt the need to shred this one into another single review!

“Angel’s Battle Cry” is the debut single from the Swedish progressive symphonic metal band Vengeant, featuring members from bands like Scarlet Desire, Mad Hatter, Darkest Void and Saint Deamon. The single was sent to us by Vengeant’s manager Emma Elmén via the Kingart Music Promotion and will be part of a 5-track EP coming later this year.

Being a big Nightwish fan, I couldn’t help but notice some similarities in Vengeant’s style and that of the aforementioned legendary Finnish band, particularly their classic “Oceanborn” album (my personal favorite release from that band, BTW). Danae’s singing is slow and dramatic and sounds similar to Tarja’s iconic voice and the keyboards give off a huge orchestral vibe. That being said, however, I do notice that Vengeant’s sound is more guitar and drum driven, with sharp, heavy melodies and plenty of blast beats.

As a whole, Vengeant’s first single is quite varied in its symphonic and prog metal style. The band can be aggressive and rough (particularly in terms of riffs and rhythms) only to suddenly transition to a more orchestral and melodic tone. I particularly love the parts wherein the operatic vocals or melodic guitars are played alongside rumbling blasts. Great stuff in all things considered and I’m very curious to hear more from this fledging symphonic prog metal act.

The artwork of “Angel’s Battle Cry” shows a red-haired, barefooted warrior angel sporting massive ash grey wings and a similarly colored banner as lighting strikes all around here. I also really like the band picture, featuring the 4 members as mages with each of them representing one of the 4 elements of nature. Earth, water, wind and fire. Overall, while Vengeant’s artwork isn’t all that original, it looks colorful and cool and is very reminiscent of the Magic: The Gathering card game, from which Vengeant has taken much creative inspiration from.

8,5 Valkyries out of 10. If you enjoy classic Nightwish and are looking for something similar but with a more old-school and occasionally extreme metal approach, then Vengeant is an excellent up and coming band to check out. Enjoy the single!