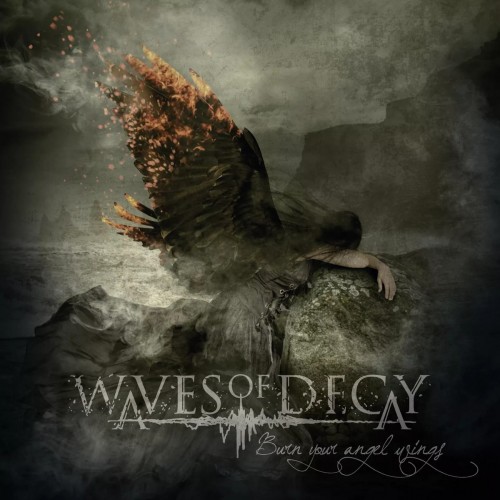 I’ve been in contact with Waves of Decay since early 2017 thanks to guitarist Arun Rao. I had already known Arun earlier when he was part of the metalcore act Hope Erodes. That same year I shredded Waves Of Decay (read the interview here: https://www.belgianmetalshredder.be/interviews/79) and I had a great time reviewing their debut EP “Cycloptic” as well. And now, it’s time to shred my way through the band’s next iteration!

“Burn Your Angel Wings” is the second EP from the Belgian metal band Waves Of Decay, after debuting in 2017 with “Cycloptic” (read our thoughts on that first release here: https://www.belgianmetalshredder.be/reviews/67). Once again this is an independently released EP and sent to us personally by the band members themselves.

The EP begins with “The Shape Of Your Blood,” a song that blends operatic keyboards and vocals with sharp riffs, heavy blast beats and an overall quick pace. Next up is “Accustomed To The Dark” a more aggressive tune with less keyboards and harsher vocals but with more melodic guitars. “F.I.N.E.” is the fastest track on the EP and would be perfect for some solid moshing, other than that, nothing in particular.

“Angered” has a more old-school metal feel with the dragged out riffs and slow, dramatic singing giving this song a dreary atmosphere. One fun twist in this song, however, are the saxophone solos in the middle part. It reminded me of the excellent saxophone-fueled Belgian death metal band Wound Collector (check out our review of their latest album “Depravity” here: https://www.belgianmetalshredder.be/reviews/214). Next up is “Catch-22,” a fun thrash tune whose main attraction is the crispy bass solo in the middle section. The EP’s final original song is “The Sleeper,” a song with chanting vocals and plenty of guitar jamming. Finally, Waves Of Decay ends their second EP with a beautiful cover of Iron Maiden’s “The Evil That Men Do.” It’s quite a special cover since the riffs feel thrashier (particularly in the faster parts) while the vocals have that same clean, operatic style as in the original. And the more melodic guitar parts are very well performed too.

Waves Of Decay’s style is best described as experimental. The band utilizes traits from thrash, death, industrial and old-school metal with some occasional touches of industrial, symphony, saxophone and custom percussions. As a whole, the songs on “Burn Your Angel Wings” are melodic and fast-paced but I do hope that they’ll further experiment with their sound since that makes the whole experience more unique and unpredictable. In addition, I think Waves Of Decay’s material could be made a bit shorter and tighter, with the exception of “The Sleeper.” Despite being the song’s longest track, it’s very well put together and doesn’t feel as lengthy as it may seem at first.

“Burn Your Angel Wings” cover art features a mourning gothic angel who has planted her face into a rock and whose wings are gradually burning off. I particularly like the colors in this artwork, the many shades of grey and green give off a depressing vibe but the bright fiery red and yellow of the burning wings provide an effective contrast. The EP’s main concept is about mourning and loss, with each track handling a specific stage of the mourning process. Denial, anger, bargaining, depression and finally, acceptance.

My top favorites are the EP’s opening track “The Shape Of Your Blood,” for its epic symphonies and operatic singing along with powerful blasts (nice sense of duality there) as well as “The Sleeper.” I love that song’s multi-layered vocal delivery and the excellent guitar jamming section. “F.I.N.E.” is the weakest track on the EP in my opinion. It’s just a fine moshing tune without any real surprises, unlike the EP’s other tracks.

7 burning wings out of 10. A solid second EP from this fledging Belgian metal band, Waves Of Decay’s latest release adds new, interesting elements to their already solid blend of thrash, death and classic metal and I hope that their future songs will be even more heavier and tighter. There’s some great fun to be had with this band, so be sure to give them a shot! Here’s “The Sleeper!”