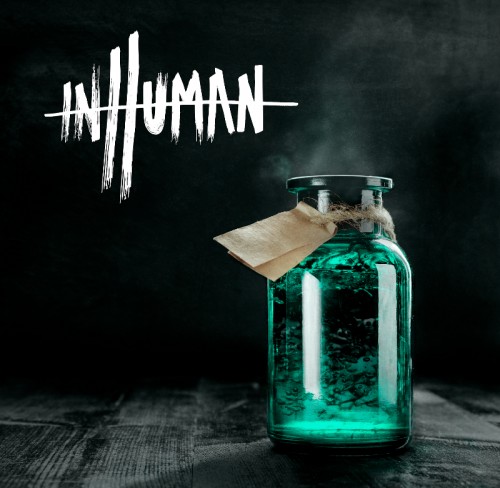 I was aware of Inhuman’s existence for a few years now (dating back to when they were still called Anwynn). In late 2019 I shredded future Inhuman founder Astrid (read it here: https://www.belgianmetalshredder.be/interviews/130) and in 2020 I was quick to hear the news that Anwynn was reincarnated into Inhuman. And with Inhuman’s eponymous debut album coming in a couple of weeks I couldn’t resist the temptation to shred this once well in advance!

Inhuman’s self-titled debut album is released independently and sent to us by our longtime Dutch allies called Hard Life Promotion. The album’s intro is a Hans Zwimmer esque opening with horns, piano, drums, guitars, orchestra and chants. Quite an intense and cinematic start to the album and I sure as hell like it!

Then Inhuman’s debut release heads to the single “The Chosen Cancer,” a hard-hitting barrage of symphonic keyboards, harsh guitars, choirs and rough male & angelic female vocals. It’s a catchy and multilayered melody. Next up is “Clockwork In The Past,” another single released beforehand in order to promote the album and one which we reviewed in the past (read it here: https://www.belgianmetalshredder.be/reviews/245). Compared to the earlier track, this tune is more guitar and drum driven and therefore feels even heavier. Then comes “Unfolded,” another aggressive track which shares many elements with thrash and death metal and a touch of metalcore, featuring frantic blast beats, raging male vocals and operatic female vocals and even some piano backed breakdowns.

The album continues into “The Day I Died,” a longer and slower track with some sweet progressive touches aside Inhuman’s usual death and symphonic traits. Then comes “Unbearably Human,” which is a pretty bluesy foundation on top of the choir singing, crunchy guitar riffs and meticulous piano tunes. “For The Life Of Me” is another furious track, which deals with mental breakdowns, represented by the hectic beats and the convincing vocals, each line delivery full of despair.

“No Bullet Required” is a sweet classical metal tune with a beautiful guitar solo and symphonies that could fit very well in a Castlevania game. “Lullaby (Casus Belli)” is a short intro which features a mother softly singing a slightly menacing lullaby to her baby as violins and pianos gently play in the background. Then comes the real track, “Casus Belli,” the longest song on the album. Full of epic symphonies, vivid chanting, vicious blasts and riffs along with melodic sections and duels between guitars and keyboards. The album eventually ends with the instrumental “Home,” one last barrage of symphonic death metal power.

To describe Inhuman’s complex sound isn’t easy, but I would call it as a mix between Fleshgod Apocalypse’s cinematic symphonies and Machine Head’s technical guitar distortions and with ingredients from other metal subgenres sprinkled throughout. Vocalists Dietwin and Eline have a lot of musical chemistry together, with the former focusing on extreme death & black metal vocals and the latter singing in a more traditional symphonic metal voice. The album features plenty of duets between both vocalists and this, like the symphonic tunes and harsh metal beats, gives the Inhuman material a great sense of duality. The other band members’ all get plenty of individual opportunities to shine throughout the release, making this a nicely balanced experience.

If you enjoyed Inhuman during their Anwynn days then I’m pretty confident that these guys and gals will entertain you just as well. Anwynn’s style is still quite present in this new Inhuman sound, but bigger, better and badder!

Inhuman’s artwork shows a steaming bottle of a transparent greenish liquid with a blank label wrapped around it. I’m not quite sure what to make of this artwork, maybe it’s a visual metaphor for the symphonic death metal cocktail that Anwynn had been brewing over the past year and is now presenting to us, smoking hot! Still, with the visually pleasing music videos Inhuman has released for “Clockwork In The Past” and “Unbearably Human” I do wish they had made their album’s artwork a bit more larger-than-life, just like their music is.

My favorite tracks on Inhuman’s debut album include the magnificent “The Chosen Cancer” and its heavy successor “Clockwork In The Past” as well as the versatile beauty of “Casus Belli.” In my opinion, Inhuman is at their strongest when they meticulously combine symphonic and death metal elements into powerful multilayered songs, just like they do in these aforementioned tunes. The other songs on the album are very solid as well, but they don’t fully catch the raw epicness that Inhuman is more than capable off. In any case, I’m more than willing to give this release…

8 symphonic death cocktails out of 10. Inhuman uses epic symphonies with suitable vocals and raw death metal riffs with suitable vocals to create epic and complex songs. A big upgrade from their old Anwynn sound and a well recommended debut album for fans of Fleshgod Apocalype and Machine Head. Here’s “The Chosen Cancer.”