A tale of two Scrooges 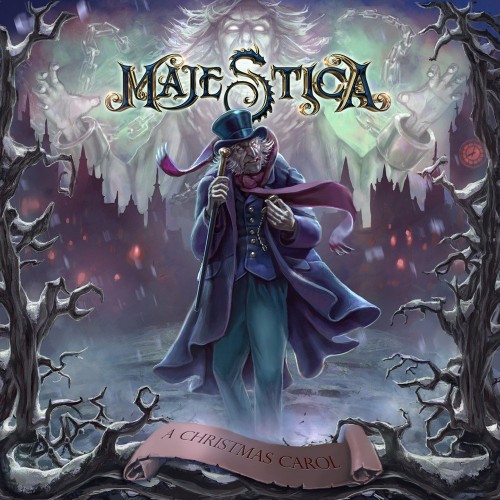 I’ve been a longtime Majestica fan and ever since joining Belgian Metal Shredder I was eagerly anticipating the moment that I would be able to shred my way through Majestica’s new album “A Christmas Carol.” During the 2020 Christmas season and my exam period I was listening to “A Christmas Carol” numerous times and now that the holidays and exams are far behind for me, it’s finally time to shred this one! “A Christmas Carol” is the second album from the Swedish symphonic power metal band Majestica (formerly known as ReinXeed) and is released via Nuclear Blast.

The album tells Charles Dickens’ iconic Christmas tale “A Christmas Carol,” with each song being a part of the entire story. “A Christmas Carol” starts with an atmospheric instrumental quick introduction, filled with jingle bells, choir chants and Christmas joy!

The album’s first actual song, “The Christmas Story,” tells the way how Ebenezer Scrooge lives before the ghosts visit, this is also reflected in the song’s sound. This track is joyful with underlying menace. It gives off the jolly feeling of Christmas but with a little touch of greediness from Scrooge. At the end of the song you can hear the Ebenezer’s despair because he wants to be left alone with all his wealth. The following track is called “Ghost of Marley.” This track has dual lead vocalists namely Tommy and Chris (who normally only plays bass). On this tune you hear the ghost of Marley visiting Ebenezer, Tommy does a great job at giving the feeling that he is genuinely scared of the ghost. The vocals on this track are really antagonizing at moments, which is amplified by the vicious drums and bombastic symphonies.

The third tune, “Ghost of Christmas Past,” tells the tale of Scrooge’s early life, from his childhood until the breakup with his true love Belle. This song gives you a perspective as to why Scrooge is such a hard-headed, stingy man. Even with this heavy lyrical content, this song is happy and Christmassy. Next up is the ballad “The Joy of Christmas,” which tells Ebenezer’s story from, his overworked and underpaid clerk, Bob Cratchit’s perspective. Bob is confident that Ebenezer can change for the better when he feels love again. This tune has a melancholic feel to it, but near the song’s end you can feel Bob’s hope is growing and developing in the need to help Scrooge.


“A Christmas Carol's” fifth song, “Ghost of Christmas Present,” talks about the misfortune happening right under Ebenezer’s nose. He’s shocked and already partially comes to his senses and promises that he will be there for his family and his “friends”/coworkers, especially for Bob’s youngest son, Tiny Tim. Once again the music from this song is happy as Christmas music should be, but the underlying message and tone shows the drama that is happening.

The next track is called “Ghost of Christmas to Come”, this song is darker and a little heavier because we and Scrooge get to see what will happen when he won’t change, DEATH! But not only will he be dead but Tiny Tim will succumb to his illness. This is a traumatizing realization for Ebenezer to see and he promises to the spirit that he will become a better man and help the less fortunate. As the song progresses, the dark atmosphere fades away and turns into a frantic tune as Ebenezer quickly acts to aid Tiny Tim and all others in need.

The album’s last tune, “A Christmas Has Come” is a very upbeat song that is really catchy and instantly stuck with me. This song deals with the now redeemed Ebenezer who knows what to do to make his life better and to be happy again, by helping others in need. It’s a joyful ending and this is well reflected in this last song thanks to the fiery vocals and orchestral beats. The album wraps up with an instrumental tune that concludes the album with a truly Majepic zing. It’s a really epic instrumental Christmas tune and also functions as a medley featuring tunes from the album’s earlier tracks.

“A Christmas Carol” is a sweet and balanced Christmas metal album that starts and ends nice and calm with an instrumental track and offers a cinematic symphonic power metal experience in between. The songs truly honor the iconic Charles Dickens novella it’s named after thanks to the swift but still deep sound they give off. The multiple lead vocals give the album a varied sound and feel which I’ve enjoyed a lot. If you enjoy Christmas, Charles Dickens and metal then this is one hell of an album. Here’s the “Ghost of Christmas Past.”