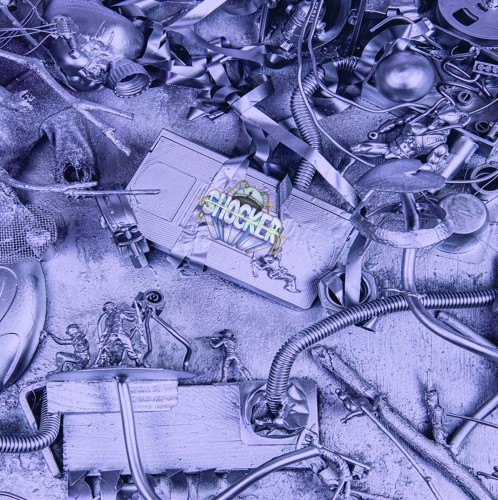 I first encountered Shocker during their first gig back in Spring 2019 where they opened up the free and fun Rock Kappaert festival. I recorded some footage of the event (which you can check at our YouTube channel) and I had a pleasant time seeing the band perform. Now guitarist David has sent us a digital review copy of the band’s upcoming eponymous debut EP and with the sweet memories of that first gig still in my head, it’s time to shred this shocker!

Shocker’s self-titled debut EP is released independently and features 4 tracks, beginning with “Thrillseeker,” a nice and heavy song with plenty of Judas Priest influences mainly due to the high-pitched vocals and rough guitar riffs. The song, however, does take a fun twist in the middle part when joyful keyboards kick in that makes me think of carnival music. The tune then transitions into a heavier, thrashier section as the song reaches its end. Next up is “Twisted Shape Of Man,” which begins with a slow yet menacing monologue that gradually builds up to a dark song with a catchy chorus. Once again the song’s middle part throws in another surprise as the atmosphere become acoustic with echoing, whispering vocals before returning to the heaviness from the start.

Then comes “The Genuine Falls,” a catchy tune with old-school riffs in the song’s first part which then moves on to a Deep Purple like keyboard section backed by sharp guitars and finally an epic solo. And finally there’s “Breaking The Silence,” a peaceful hard rock tune that does have a menacing undertone which becomes more apparent as the track progresses. The song does eventually gain enough intensity to transform into a galloping Iron Maiden like tune before slowing down to its chilled out hard rock for its finale.

The Shocker guys refuse to have their material chained to a specific subgenre and I’m not going to do that either. But what I can say is that Shocker’s music features classic hard rock and metal vibes with many touches of thrash and progressive metal along with some pretty unorthodox songwriting. Shocker mainly achieves this by combining the many typical elements from those subgenres and delicately putting them together. Sometimes the band can be harsh and heavy, other times the band gets very operatic and at even other times they slow down to peaceful acoustics.

I also love the duets between Sammy’s high-pitched vocals and Koen’s lower backings. Sometimes they sing alongside each other (like in “The Genuine Falls”) or Koen echoes Sammy’s earlier lines (like in “Twisted Shape Of Man”). As a result, Shocker provides a varied and unpredictable experience that still feels familiar and pays homage to the many iconic bands they’ve taken inspiration from (among them Judas Priest, Blind Guardian, Iron Maiden, Foo Fighters and many others).

The cover art of the Shocker EP shows a pile of rubble wherein the band’s logo is printed on an old VHS tape lying in the middle of the pile. Not much to say about this artwork, but I do really like the band’s promo picture wherein lightning bursts out of each band member as if they pay homage to Raiden from the Mortal Kombat fighting games. Maybe I must consult with the Elder Gods.

I really like “Twisted Shape Of Man” because it’s such an atmospheric and multifaceted track. Particularly the tandem of acoustic and electric instrumentation is very effective. I also love the straightforward rocking beats of “Breaking The Silence.”

Any weak songs? Not really, it mainly depends on what kind of rock or metal you prefer, as for me, I prefer songs with many different traits and that’s something that Shocker is pretty damn good at. I did wish for an extra track or two, maybe something instrumental, that would’ve been awesome!

8 electric chairs out of 10. With their eponymous debut EP Shocker show themselves as a very interesting act with traits of hard rock, old-school metal, progressive and experimental metal all meticulously combined to create a fresh yet familiar experience. Check out the teaser below!