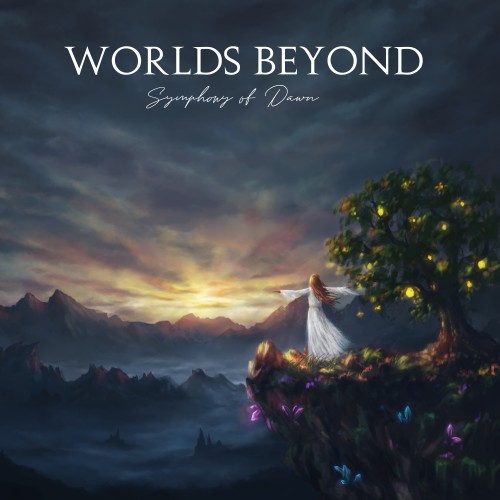 A young Belgian band who recently contacted us personally was Worlds Beyond. I quickly grew fond of their symphonic metal sound and so we ended up doing an interview with them (COMING SOON) and getting their debut album “Symphony of Dawn” sent to our doorstep. It’s been a while since I shredded some material (damn those exams) but now I’m ready to shred again!

“Symphony Of Dawn” is the debut album from the Belgian symphonic metal band Worlds Beyond and is released independently. The first track, “Wonder,” is an instrumental intro to the album and creates a light medieval folk atmosphere that’s also a bit dark. That blend of light and darkness is something that I like in symphonic metal. The track is long enough to give an intro to all of the songs which is very nice. The music from the intro concludes into the second song, called “Winterstorm,” which builds a Nightwish like feel from this majestic intro. The vocals in this song are beautiful, operatic and high pitched. This makes a perfect balance with the catchy roaring guitars.

Next up is “Ice King,” a seemingly rougher tune thanks to the clean male vocals, which are nicely paired with the eerier and deeper female vocals. This extra heaviness is also reflected in the guitars which are more intense. The following song is called “Moonlight,” a more lighthearted song featuring happier beats but it does have a melancholic undertone because of the topic of seeking yourself while being lost on the inside. The topic from this song speaks to me personally because I’m still searching for my own luck and happiness and Stijn “Metal Shredder” is helping me a ton with that quest. This song kind of gives me a little push to keep on seeking my own happiness.

The fifth track “Fallen Star” is a very tragic song when you start listening to the lyrics, but it’s also kind of relaxing because in the end you really get the feeling that the girl who the song refers to has ended well even though she disappears into nothingness. The sixth tune is called “The Fay.” It’s upbeat guitars and keyboards give off a happy feeling that makes your day more relaxed while still giving off that typical zing from Valerie’s voice. Up next is “Child In The Light” which, much like the earlier “Winterstorm,” is a beautiful and balanced symphonic song with the high vocals and the shredding riffs, but in this particular song the guitars manifest themselves the most during the chorus and the parts wherein the vocals are absent.

“Am I Lost” is the album’s eighth track and features quite a long and majestic guitar solo that, along with the folk influences, gives the song a high fantasy feeling that really fits this album. “Symphony Of Dawn,” the album’s title track and is a core symphonic tune that makes the hairs on my arms stand on end. Not only did I get goosebumps during the first time I was listening to this song but I have them every single time I’ve been listening to it. “Symphony Of Dawn” really rocks and at the same time it’s very soothing.

The following song, “One” is a nice and slow song that can hush you to sleep and still keep you awake when necessary. It ends at a rocking pace that still brings a really satisfying and peaceful feeling to the whole experience. The eleventh track is called “Edge Of Faith” and it’s a nice and rocking song that is very powerful. The drums give the song a really smooth pace that is perfect to work out to. It really gives you energy and you (almost) can’t stop yourself from bouncing your head or, when you’re like me, your whole body. The last tune is an acoustic version from “Child in the Light” and has the same vibes as the non-acoustic version but is more soothing and relaxing. Valerie’s voice fits perfectly for this kind of song and when this would be played live, it would bring everyone closer together. As for me, it would give me the feeling that I’m a little part of something very big.

Worlds Beyond’s “Symphony of Dawn” is an excellent album that I absolutely love and that fans from Nightwish and Within Temptation will really like too. Some of the album’s songs really give off the same vibes as Within Temptation’s album “The Silent Force.” Valerie’s vocals kind of remind me of a combination of Sharon den Adel’s and Floor Jansen’s. But it still has that unique tune that makes it stand out from the rest and I would recognize it anytime. This album is, in every good way, perfect to end your day after a long day at work or as the album you can listen to after spending a great weekend at Graspop, or at every other festival for that matter. Here’s “Moonlight.”