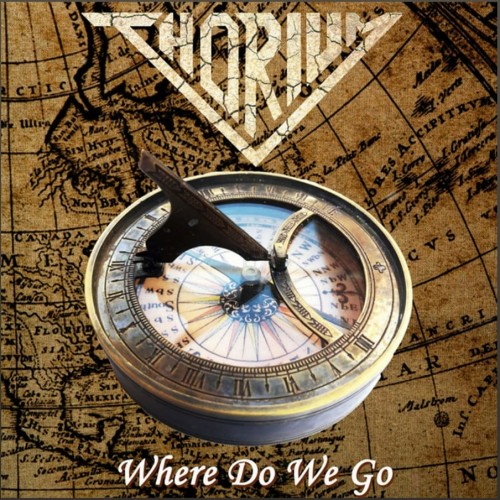 One of the bands I was introduced to in 2018 and one which gave me the most fun to shred through that year was the Belgian heavy metal act Thorium. Not only was their eponymous debut album a true joy to review (read it here: http://belgianmetalshredder.be/reviews/89) but I also did a very fun interview with guitarist and founding member Dario Frodo later that year as well (read it here: http://www.belgianmetalshredder.be/interviews/108). And now the band kicks off the new year with a great single for their upcoming second album. Let’s shred it out!

“Where Do We Go” is the debut single from the second album from the Belgian heavy metal band Thorium. This upcoming album will be called “Empires In The Sun” and is scheduled for release March 5th via Dutch record label Freya Records. The single has been sent to us by Dutch promoter (and our longtime friends and collaborators), Hard Life Promotion.
The single features many of the traits already featured in Thorium’s sound from the beginning. Soaring guitar riffs and equally soaring vocals, high speed drum beats, tight song structure and plenty of power guitar solos. One new thing I did notice in this new single are the higher bass levels, which gives the song more of an Iron Maiden vibe as well as some more prominent backing vocals, especially during the chorus to make the song’s title “Where Do We Go,” feel even a bit more grandiose.
Other than that, there isn’t much left for me to further describe Thorium’s sound. If you enjoy old-school heavy and power metal acts like Iron Maiden, Judas Priest, Hammerfall, Blind Guardian and of course Ostrogoth (since several of Thorium’s members used to play in Ostrogoth) than Thorium is certainly one excellent band to check out. Not just this particular single, but the rest of their beautiful material as well. The whole concept behind “Where Do We Go” is the path of life and the numerous choices we all must make in various points in our individual lives. Of course, it isn’t always certain which choice is best for ourselves until we’ve walked long enough through the path we’ve chosen. The single’s music video features a female protagonist who, as a young girl, finds a compass in a candle-lit cave and then ventures into the wide outside world. As her journey progresses, she encounters her path going 2 ways. After choosing a path, the girl returns, this time as an adult woman and she finds a watch buried in the ground. Continuing the path she followed as a child, she once again finds her path going 2 ways. After choosing another path, time moves forward once more and the woman, now an old lady, sits on a table and, looking at both the compass and the watch she discovered earlier in her life, reminisces back at the choices she made in her life.
The choices the woman has made through her life and whether she’s satisfied with the decisions she made are left ambiguous and that’s the exact message that “Where Do We Go” wants to send. Choosing a path in life is hard, but the band believes that no matter what path you chose, it will lead to at least some answers.

8 compasses out of 10. After debuting with an excellent album in 2018, Thorium is ready to unleash another awesome full-length at us. “Where Do We Go” shows us a highly energetic band that’s a perfect addition to every old-school metalhead’s list. Enjoy the single!