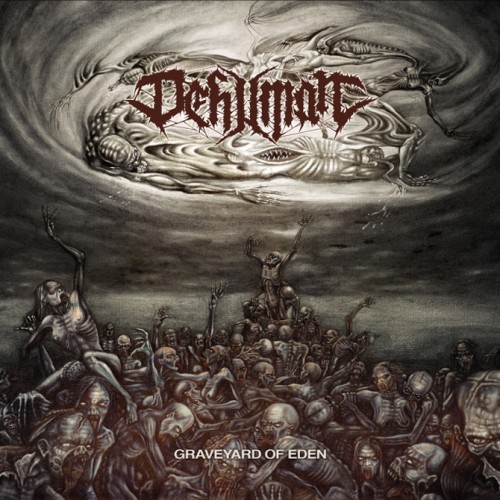 I saw Dehuman only a week ago in the Elpee in Deinze. A place where I like to hang around when it comes to meeting new bands. Together with The Curse of Milhaven, Dehuman were a supporting band for Vital Remains. Dehuman gave me and the audience a rock-solid performance and it was an ideal warm-up for the beer bottle shattering carnage that followed during the Vital Remains gig. I went outside and saw this sweet looking CD case from the band and bought it right away! And I’m very happy to say that this album serves as perfect proof that there’s yet another great Belgian band begging to be discovered by us all!

At its core, Dehuman’s Graveyard of Eden is by the book death metal. The album’s tracks show plenty of variety in themes and pace. Certain songs may start off slow and steady, but then they suddenly explode in your face! For example, the album’s opening track, Sepulcher of Malevolence, begins very aggressively and fast-paced but right in the middle of the song the band lets off some steam for a crisp, classic heavy metal style guitar solo only to regain their brutal edge right after that. Another great highlight of Graveyard of Eden are its lyrics. They are dark, explicit and gruesome (more about that in the Park of Themes part). Many sentences in the songs are repeated three times in a row with only the final two or three words being different. Think about Winston Churchill’s legendary “we shall never surrender” speech and you’ll know what I mean. Of course, great lyrics don’t mean much without great vocals. And Andrea’s vocal cords do an excellent job at making this hellish world of Dehuman come to life. He has a demonic, anger-filled voice that makes you believe he could jump out of your speakers to tear your spine out!

Graveyard of Eden’s songs tell many different stories but they all share the same basic themes of death, suffering and (sexual) violence. As I already mentioned (unless you skipped the preceding paragraph, you lazy bastard) the album has gruesomely detailed lyrics. The album’s fifth song, Temple of Lust and Fire, is about the angel Madonna, trapped in Hell and brutally raped by demons. Eventually she succumbs to the forces of Hell and becomes the Goddess of Sins. Another track, Cerebro Veneficium, deals with the catholic church brainwashing nonbelievers by literally slamming needles in their heads. The narrator undergoes this same treatment and ends up being successfully converted. No happy endings in any of the album’s songs, but endless corruption and eventually leading to total destruction of all life on earth!

I really love the Graveyard of Eden’s artwork. Like the lyrics, the cover art is very detailed and gritty. It shows a bunch of zombies (at least, that’s what I think they are) moshing around the place and a few unfortunate souls trying to escape the flesh-tearing mayhem around them. Yeah, I guess the ever-growing army of the undead also likes mosh-provoking death metal, like me. The inside cover art shows close-ups of the album’s artwork as well as individual photos of the band members in full shredding action. The back cover has drawings representing the themes for each track on the album. Once again very nightmarish and graphic.

Both Temple of Lust and Fire and Goddess of Sins take the win here although for completely different reasons. Temple has my favorite lyrics on the album, showing in gritty detail how an angel becomes corrupted after suffering endless demonic rape and being exposed to the demons’ black semen. Next time I’ll have sex I’ll probably imagine myself being that demon. Fuck, now my sexual fantasies really start to get wicked! As for Goddess of Sins, this album features the most beautiful guitar riffs on the album. A huge chunk of the almost 8 minute long closing track is nothing but great instrumental work, with Rafaël and Mathias grinding their axes for some technical guitar playing mastery that reminds me the most of Iron Maiden. It makes me wish the album had a long, fully instrumental track. Consider this a tip for the next album, folks!

8,5 raped angels out of 10. Very well worth checking out even if death metal isn’t really your thing (but I’ve got to say that albums like this baby really spice up my long dormant appetite for this subgenre). Dehuman perfectly shows that death metal bands can do a lot more than just growling like the Cookie Monster on steroids. And of course, if you like death metal, than this album should be a mandatory part of your collection. Just stay away from crypts and graveyards when playing this thing. You never know that the dead might rise up from their graves to bang their worm and larva eaten heads along with you!