Live by the sword! 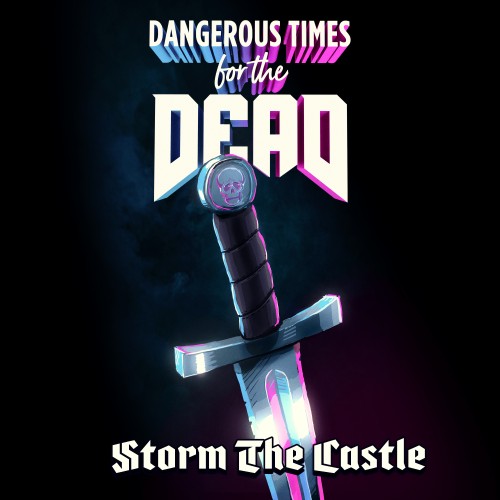 For the past couple of months we’ve been in close contact with the Dutch old-school heavy metal act Dangerous Times For The Dead. Throughout this year, we already had the opportunity to play some of their singles in advance on BMS ON AIR and we also had a great interview with bassist Gerrit (read it: http://belgianmetalshredder.be/interviews/148). And earlier this month the band released another new single, which I’m going to shred right now!

“Storm The Castle” is the 5th single from the Dutch metal band Dangerous Times For The Dead and, like its predecessors, is independently released and available on all streaming channels for everyone to enjoy.
After opening up with the sounds of clashing swords, galloping horses and barking dogs the band unleashes fast, upbeat riffs and beats with high hitting vocals and catchy lyrics. In the single’s middle part, things cool down a bit with a bluesy melody and a lengthy guitar solo that both gradually build up to the same upbeat rhythms as in the song’s earlier part and its eventual finale.
Describing Dangerous Times For The Dead’s sound is easy, take elements from old-school metal acts like Black Sabbath, Iron Maiden, Dio, Judas Priest and Danzig. However, all of the band’s singles released thus far have certain individual traits (a few examples include the Dio inspired single “Crystal Gazer” and the thrash oriented “Dangerous Times For The Dead” single) and “Storm The Castle” is no exception. For this particular single, the band puts their sights on blood-pumping power metal both in terms of themes and overall atmosphere.
One clear, consistent strength of Dangerous Times For The Dead are BjØrn’s vocals. His slightly raw and snarly yet also operatic style of singing is very reminiscent of those of Rob Halford, Ronnie James Dio and Glenn Danzig, his high notes in particular are quite impressive. Other than that, the band’ style remains catchy and melodic, just like those legendary bands that have inspired them. And if you enjoy those acts, then Dangerous Times For The Dead’s varied material will certainly entertain you as well. Dangerous Times For The Dead’s simple yet effective logo (I love the DOOM like font) looms above a badass looking sword that’s likely stuck into an anvil or something. Maybe a King Arthur reference, that could be possible, since the single's music video features plenty of Medieval horse riding, sword fighting and horse riding.

8 Excaliburs out of 10. While Dangerous Times For The Dead’s old-school style may not be very original, the band’s varied and enjoyable material does keep things interesting. “Storm The Castle,” along with their other singles, are well recommended if you’re looking for some classic metal madness. Now enjoy the single's music video!