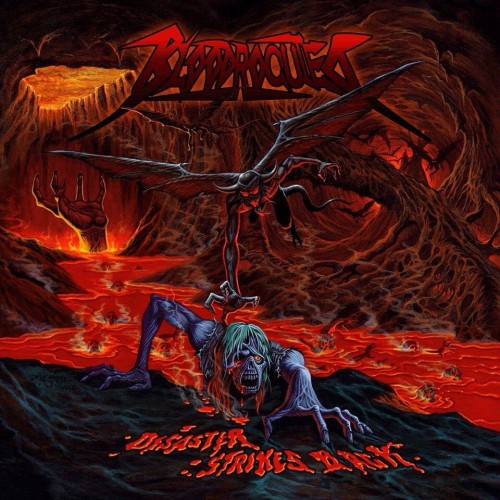 Bloodrocuted was one of the first Belgian metal bands I discovered after figuring out that the Belgian metal scene had a lot more awesome stuff to offer than just Channel Zero. I bought their debut album, Doomed To Annihilation, the same night I saw them perform for the first time (November 2014) and saw a lot of potential in the band. In February this year the guys returned for another round of thrashing madness. And I’ve got to say, Bob and his gang are in it for real!

Disaster Strikes Back can easily be described as a sequel to its predecessor in pretty much every way possible. Bloodrocuted’s lightning-fast, brutally aggressive thrash metal style (similar to acts like Slayer and Overkill) is fully retained in this album. However, I’m pleased to say that the band took time to work on their strengths and make their songs more balanced in pace and structure. This makes this album’s songs feel heavier and punchier and overall more memorable. Bob’s vocals have also changed compared to his work in the previous album. He now has a harsher vocal style rather than the clean vocals he used in Doomed To Annihilation and it suits the style and themes of Bloodrocuted much better. In the final track, Rise of Evil, Bob even changes vocal seats with Daan who employs death metal growls and shrieks, and he does so with flair and style.

A primary theme in the album’s track list is revolting against slavery and oppression. Songs like Revolution of the Enslaved and Mors Indecepta deal with slavery in the literal sense. Human/Beast, however, is about social slavery, about doing the exact same thing as other people do no matter how morally wrong it is. In all these aforementioned songs, the protagonist refuses to follow suit and decides to take a stand against this injustice. Other tracks, such as Burning the West and Consumer of Death, are anti-war and anti-pollution themed respectively. Yeah, you guessed it. It is nothing original or new to the trash metal genre. But let’s face it, songs of this intensity can’t be about strolling through meadows on a sunny Sunday afternoon or about buying fruit at the grocery store. It should be about giving hypocrisy and corruption the fucking middle finger!

The album’s artwork is very colorful and well-drawn. It shows the same character from the first album, who is now pulled into the underworld and tries to escape back to the world of living. The inside cover features the same hellish world from the front with pictures from the individual band members in full thrash metal action. The back cover is the traditional photo with the full line-up. I actually wished that they changed the background from that final picture to an image wherein the band were standing around a pile of bodies (in a reference to the first track, wherein they successfully revolt against their oppressors).

The opening track, Revolution of the Enslaved takes the cake here. The band starts off extremely strong with their typical high-speed guitar shredding and drum bashing. In addition, Bob’s vocals are at their best here. He yells with such aggression and conviction that you cannot help but imagine him leading a group of slaves, fed up with being oppressed, finally taking a stand against their masters with the use of brutal thrash metal force. The runner-up is Mors Indecepta, another very memorable track for the same reasons as the aforementioned track.

8 winged, lost soul grabbing demons out of 10. Bloodrocuted have positively evolved their sound from their previous effort and I feel that, given time, they can perform even better than they’re already doing today. Certainly well-worth checking out, both on disc as well as live. Now go and enjoy this “disaster.”