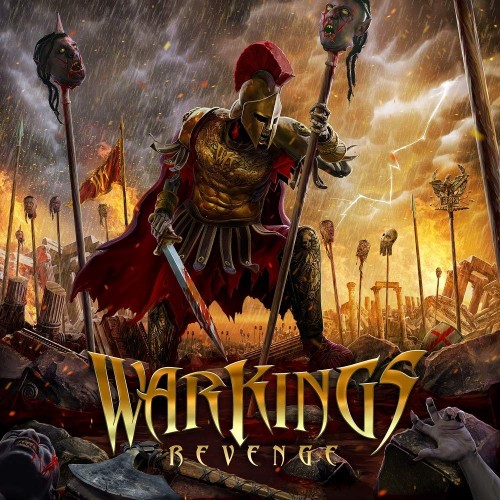 I discovered Warkings when browsing through Instagram and I introduced them to my man Stijn “Metal Shredder” and we both dug this band quite instantly. I’ve always had a huge appetite for power metal such as Hammerfall and Iced Earth so shredding this new Warkings album became an obvious choice for me. “Revenge” is the second album from the power metal band Warkings and released through Napalm Records, the album was provided to us by Hard Life Promotion.

The first song “Freedom” is an epic opener. It’s a very powerful song backed by grinding guitars and galloping drums and with quite heavy vocals. Especially the grunts makes this song more brutal than how it would originally be. Next comes “Maximus” one of the singles released prior to the album. This tune is much more energetic and upbeat. It’s an anthem like track that would be ideal to ride out to war, Ancient Roman style! The song’s chorus is a catchy duet between the heavy and clean vocals. The album’s third song is named “Warriors” and is a really epic power metal track. It pays tribute to the mighty warriors of which this song is about, it really has that festive vibe thanks to its technical guitar solos and the uplifting main beats. The following track “Fight in the shade” is the second heaviest song on this album because of its roaring riffs and vocals that are both operatic and vicious so it really fits its title. This song gives off a real “We are at war and must fight” feeling.
“Odin’s sons,” the fifth tune is slower but still pretty heavy and powerful much due in part thanks to The Queen of the Damned’s raw backing vocals. It does kind of miss a fade out or outro since it ends really abruptly and without a warning. The sixth song “Banners High” is more intimate, which makes it easier to listen to and to take in. It’s a lot more atmospheric and lighthearted. The riff is highly guitar based and gives this tune a more slower yet stronger vibe. Next up is “Mirror, mirror” a clean and very diverse track with quick and hard parts but also with quite a serene chorus. It has a very quick bridge which builds towards a perfect transition to the catchy chorus. The eighth song is called “Azrael”. The beginning of the song is like a silence before the storm and in this track the drums are more prominent and they give of a marching vibe that fits perfectly with the lyrics and there once again is some sweet guitar solos to top it off. “Battle of Marathon”, the ninth tune is stylistically like Amon Amarth because of the fast drums, sharp guitars and rougher vocals. Like many of other Warkings songs, this is another track fitting for a company of foot soldiers heading out to war. Next on this “Revenge” album is the song “Warkings,” which, obviously, serves as the band’s anthem and is very powerful and enchanting to listen to. It really draws you in with its marching beats, keyboard loaded chants and motivational lyrics which deal with brotherhood and fighting spirit! And last but not least there’s “Sparta”. This track has some brutal parts in the riffs and vocals that made it stand out from the rest of the album. It gives you the feeling that you are part of the Spartans of the 300 movie franchise. After all, this is Sparta!

Overall, Warkings’s “Revenge” is a really powerful and atmospheric but still a pretty dark and brutal album. This album feels like it could be from Hammerfall, not only because of the musical style but also because The tribune’s voice is similar to that of Hammerfall’s Joacim Cans.
Warkings is a band that I can warmly recommend to fans of Amon Amarth, Iced Earth and Hammerfall in particular as well as those who love the classic sword and sandal movies like 300, Benhur, Braveheart and Gladiator. It contains influences from all those bands and references to all those epic movies. So check out this royal quartet unless you’re not entertained by power metal! In any case, here’s “Maximus.”