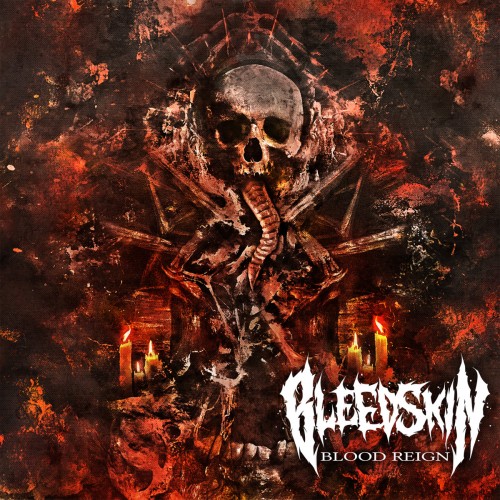 Bleedskin is a band I’ve been following for a while and who I saw live during a very enjoyable Judasfest 2019. Our friend Renald “Neptune Shredder” has been so nice to send us over to Bleedskin’s bandcamp to check out the band’s first full-length release, “Blood Reign.” And of course, we shred as much metal as possible, especially when it comes from our own humble little country.

“Blood Reign” is the first album from the Belgian death metal band Bleedskin after they debuted with a demo EP called “The Rotten One” in 2018 and like the aforementioned EP, “Blood Reign” is an independent release.
The album begins with “Perverted Feelings” a symphonic opening with various galloping drum beats, pianos and chants. While this tune sounds relaxed at first, there is a clear threatening undertone, which eventually builds up towards the album’s single, “Eternal Hatred.” This song features grinding riffs, scorching bass, blast beats and growling vocals. Typical death metal stuff, nothing more, but certainly nothing less. The ferociousness continues with the follow-up, “Obsession,” which speeds things up for one throat-ripping tune and the same goes for that song’s own successor, “No One Will Hear You.”
The album’s fifth track, “Schizophrenia” is slower and showcases Bleedskin’s more melodic side while “Point of No Return” hits the gas hard once more. “Perversion of Mankind” combines speed and melody as well as some breakdown-like riffs. “Silence Is Your Only Way” puts high emphasis on blast beats, cackling guitars and roaring vocals. Next up is “The Dead Sale” which features a multitude of raw singing and adrenaline pumping beats, definitely mosh pit material right here. The album’s penultimate track, “Innocent,” once again features a blend of speed and melody and finally the track “Chaos Theory” makes the band explode one last time with all their fury!
While Bleedskin may be offering an enjoyable more-of-the-same death metal experience at first, there are a couple of qualities that make them stand out to me. The first thing is Anouck’s vocals, while a ton of death metal acts rely on grunting, growling or shrieking, her voice feels more like simultaneous growling and shrieking. It gives her vocals a unique kind of brutality, further emphasized by the band’s powerful, groovy rhythms.
The second quality are the many excellent guitar solos throughout the album. In each track either Benjamin or Céline jam out some technical wizardry and I’m always a sucker for epic guitar work. And aside from that the crunchy bass and fast-paced drums offer all the other necessary ingredients to create a compelling death metal atmosphere. The artwork of “Blood Reign” features an image of hell, fire and brimstone with some small details put throughout. Aside from the big skull there’s also the tail of a rattlesnake, burning candles, teeth and wooden spikes. For me, the album’s title and cover art feels like an homage to Slayer’s iconic “Reign In Blood” album. Only thing missing are some goats.
As for the themes on “Blood Reign,” well, it’s death metal’s usual set of joyful topics like hatred, violence, mental illnesses, pain and despair. Hellish subjects with hellish artwork and hellish tunes, an excellent cocktail, hell-made.

My preferred tunes on “Blood Reign” include tracks like “Eternal Hatred,” “Schizophrenia” both of which feature Bleedskin’s melodic side as well as tunes like “Obsession” and “The Dead Sale,” for they show off the band’s faster and more aggressive side and finally songs like “Innocent” and “Chaos Theory” who aim to combine both of Bleedskin’s musical sides. Great stuff overall.
Any real weak tracks? Not really, to be honest, although I hope to see an instrumental track in future Bleedskin releases since the guitar work on this album is splendid. That being said, I’ve really enjoyed this death metal serving, so I’m now offering Bleedskin…

8 slayers out of 10. Taking the usual death metal ingredients and adding in guitar technicality and female ferociousness not often seen in this subgenre, Bleedskin’s first album offers all the blood and gore required for them to rip and tear through hell and back! Here’s the video for “Eternal Hatred!”