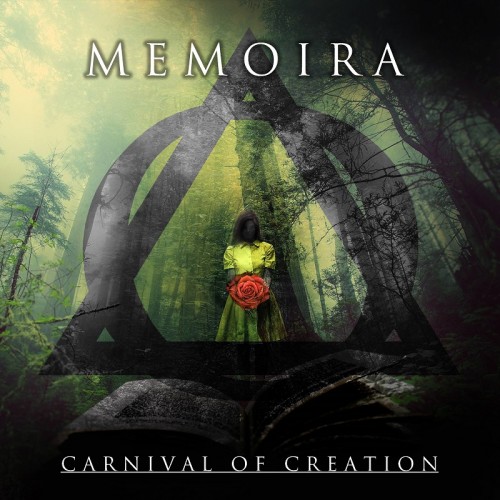 Since I listen to BMS ON AIR on a weekly basis I’ve heard a lot of great bands over the months. One band that really stood out for me was the Finnish gothic metal band Memoira. They stood out so much that I decided to get their latest album shredded.
“Carnival of Creation” is the third full-length from Memoira and is released and sent to us by Finnish record label Inverse Records.

The opening song “Dawn of Time” starts very calm and mysterious and goes on to be quite an eerie song with a combination of dark and lighthearted moments which include upbeat guitars, moody pianos and relaxed vocals. The song is about living through dreams that are in the past but also in the future. “Carnival of Creation” the title track of the album is a darker and more atmospheric song with faster beats, heavier riffs and more orchestral keyboards. The song gives a feeling of looking back at a past life from out of the dead and kind of looking at life as the laughingstock of creation.
The next song “Queen Element” is about the creator of nature and the elements. This creator wants to be praised in heaven because of her creations and in the path to recognition she becomes greedy and experiences a fall in which she decides to settle down and live with the scars but also with the happiness when things go the right way. This makes this song kind of a rollercoaster of emotions and different riffs. Annika’s vocals give the song a fragile undertone and there are even some raw grunts from keyboardist Lassi.
“Hunter’s Moon” is a more epic song that gives off a very symphonic and power metal vibe. Aside from the many upbeat guitars and keyboards, it also has some grim parts because of the song’s topic of being cursed. The following song “Dark Passenger” begins very clean and soft and evolves into a very melodic song with awesome drum blasts that go perfectly with Annika’s lighthearted voice and fast pianos in this otherwise dreary song. “Shooting Star,” is a track about the passing of time and with that also the passing of life. It has quite a joyful and lighthearted melody that makes the song very nice to listen to without feeling somber or getting stuck with the sad memories of a person you once knew or isn’t there anymore, I would even say it brings back happy memories of lost loved ones. Well, at least it did for me.
The follow-up song “Snowglobe” is a nice symphonic song with a doll like joyfulness over it even though the album as a whole has quite a dark theme. This song’s intimacy and ballad quality really is a nice breather compared to the rest of the album. The very last song of the album, “Crimson Bride Symphony” is another slow and intimate song full of hope and beautiful optimism but once again it has a grim side to it because of the slightly sad and lonesome feelings the lyrics give to the song.

This album is a dark but still lighthearted album, the darkness lies in the lyrics and the song’s topics. The lightheartedness lies in the upbeat and sometimes really happy sounding melodies. Memoira creates a magical and dreamy atmosphere using nothing more than angelic vocals, energetic guitars, orchestral keyboards and pounding drums. Highly recommended to all symphonic and gothic metal lovers out there! Here’s “Shooting Star.”