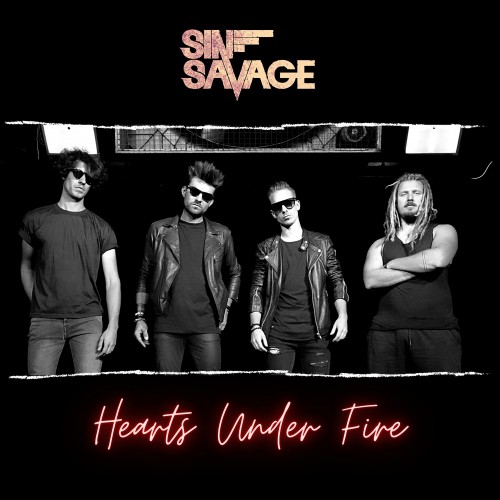 The Belgian heavy metal band Sin Savage is an act I’ve been following for a couple of years now. Hell, I even knew them back when they were called NightmareBE (and I interviewed them back then too: http://belgianmetalshredder.be/interviews/82). Once again our friends at Hard Life Promotion have been eager to send over Sin Savage’s new single and of course my shredder trigger finger is itching!

“Hearts Under Fire” is the fifth single from the Belgian heavy metal band Sin Savage who made their recorded debut last year with the excellent EP “Lost In The Dark” (which I reviewed: http://belgianmetalshredder.be/reviews/158) and have since then released some more new tunes in the past 4 months. Compared to Sin Savage’s earlier singles like “Blinded By Lies” and the aforementioned “Lost In The Dark” this new single is a slower and more melodic tune but the guitar riffs still retain a sweet groove and the vocals still have a naturally howling and attention-grabbing quality to them. That does not mean that “Hearts Under Fire” is all mellowed-out however, as the song does have a more aggressive interlude with sharper riffs and a fast-pounding drum solo before the song returns to its usual calmness.
Although “Lost In The Dark” remains my personal favorite Sin Savage single I do admit that “Hearts Under Fire” is certainly in my top 3 singles that the band has currently released. While a tune like “Lost In The Dark” is more speed metal inspired with blood-pumping, headbanging beats this single is more relaxing hard rock while maintaining Sin Savage’s usual attitude. So I you enjoy Sin Savage’s earlier songs you’ll certainly enjoy this one. The cover art for the “Hearts Under Fire” single simply shows the Sin Savage guys confidently posing in a very stylish black-and-white photo with the single’s title written in soft red neon light. Nothing more, nothing less.
But what I do admire is the song’s overall theme. Personally, I see the song as a motivational track for everyone who’s suffering through the current COVID-19 pandemic. The single’s mixture of gloomy melodies and more upbeat tunes seems to reflect that along with the lyrics that deal with depression and darkness and the desire to keep the lights on and to keep on going.

8 burning hearts out of 10. Sin Savage has been consistently bringing out great new tunes over the months and this new single is no exception. With atmospheric melodies, powerful vocals and heavy underlying beats this band keeps on trucking despite the ongoing crisis! Enjoy the single below!