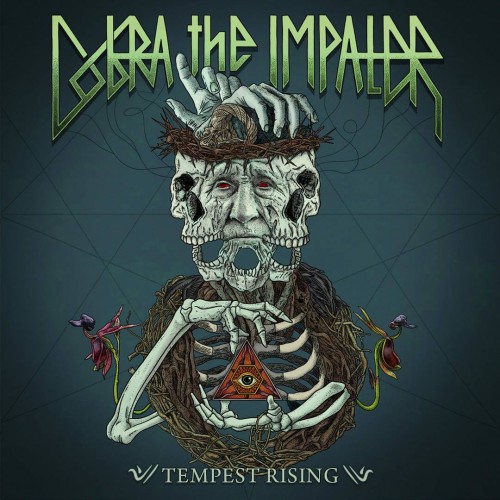 I was first introduced to Cobra The Impaler from guitarist Mathieu Vander Vennet, who’ve known for five years now as part of the Ghent based death metal act Carrion. Earlier this year he showed me a teaser of Cobra The Impaler’s sound and now, he gave me the opportunity to check out the first single from his freshly formed band. And given the fact that I’m a big lover of his work with Carrion (as well as the stuff his bandmates have done with their respective bands) I can’t resist the temptation to shred this one right away!

“Tempest Rising” is the debut single from the Belgian metal band Cobra The Impaler, featuring members who’ve played in bands like Aborted, Hæster, Majestic Sun, Soul Grip and of course the aforementioned Carrion. “Tempest Rising” is the first single from the band’s upcoming album “Colossal Gods” which will be release in Spring 2021.
The first thing I’ve noticed when I was listening to “Tempest Rising” were the huge Mastodon vibes, in particular thanks to the contrast between the thunderous guitars and the seemingly relaxed vocals. Unlike Mastodon, however, the emphasis on Cobra The Impaler is much more on technical guitar solos and blast beat drumming which gives their sound a lot of personal finesse and personality. There are no less than 3 guitar solos on “Tempest Rising” and their function as interludes between the song’s verses.
Overall, “Tempest Rising” offers an excellent preview for Cobra The Impaler and their upcoming album. The single has catchy, powerful riffs, crisp bass, hypnotic singing, marching drum beats and an atmosphere that simply draws you in. If the other songs on Cobra The Impaler’s upcoming “Colossal Gods” album will be just like this one, I think I’ll be up for a great shredding time! The artwork of “Tempest Rising” features a three-headed skeleton torso holding the (in)famous Illuminati symbol while the skeleton is surrounded by a “crown” of thorns and dead plants. The three-headed head also wears a crown of thorns itself with two hands seemingly controlling the skeleton while it screams in agony. It’s a colorful yet bizarre cover that, once again, reminds me of Mastodon.
The song’s theme is about living your life to the fullest without any regrets. An honest and inspiring message in these dark times and for which I’ve got nothing more to say.

9 cobras (obviously) out of 10. With a spectacular debut single spiced with blasting drums, epic guitars, hypnotizing vocals and a ton of sludge, Cobra The Impaler has made a quick but excellent first impression. I’m already looking forward to shred my way through the debut album, but in the meantime, you can check our country’s biggest drumming export product Dirk Verbeuren do a drum playthrough of “Tempest Rising!” Enjoy!