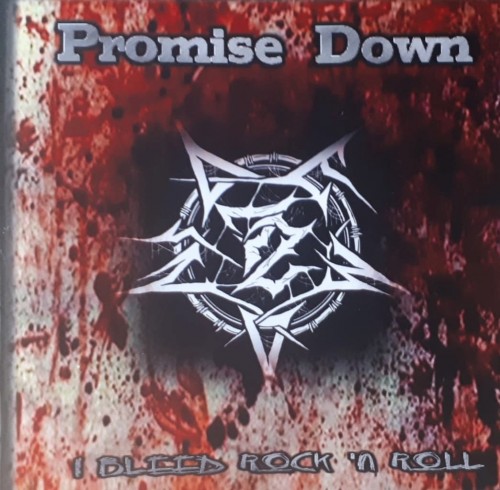 Promise Down’s guitarist Daniel has been following us for a long time now and it didn’t take long for his band to offer us the chance to shred our way through Promise Down’s debut EP “I Bleed Rock ‘N Roll.” Let the bloodletting commence!

“I Bleed Rock ‘N Roll” is the first EP from the Belgian hard rock band Promise Down. The EP begins with “Turn To Break The Seal,” a fast-paced beat that reminds me a lot of Motörhead thanks to the catchy, bass-heavy riffs, hectic drums and gravely vocals. Not to mention the song’s about drinking Jack Daniel’s! The EP’s second song, “Furious Masturbator,” is more sleaze rock inspired with joyful guitars and obviously plenty of sexual innuendos! Born addiction will cause some friction indeed.
Next up is “Don’t,” a tune that begins with a peaceful acoustic intro before the song turns to furious riffs and aggressive drum beats. It’s a nice musical metaphor of a man who was enjoying a good long Sunday sleep after a Saturday night of partying and drinking until he gets abruptly and prematurely woken up by his wife or girlfriend. At least he’s willing to take the kids to school and do the dishes. The EP’s fourth track, “Let It Out,” is just another energetic tune like the others, nothing more, but certainly nothing less. And finally comes I Bleed Rock ‘N Roll’s title track, a sweet anthem tune that honestly tells you that you’re never too old to rock, especially when you bleed it. I really like Promise Down’s logo, it looks like a blend between Venom’s, Slipknot’s and Evil Invaders’ respective emblems while it also looks a bit like a bottle cap. In addition, I like the numerous blood splatters on the album’s cover art and disc, taking the concept of bleeding rock n’ roll quite literally. As for the EP’s themes, it’s the usual hard, glam & sleaze rock stuff about such politically incorrect topics like alcohol consumption, partying, hangovers, sex and of course rock ‘n roll.

Being a huge Motörhead fan (and whisky lover), I obviously enjoyed the EP’s opening track “Turn To Break The Seal” very much. It breathes Motörhead and it’s best played loud! I also loved the catchiness of the next track, “Furious Masturbator,” not to mention there aren’t many songs out there that explicitly deal with the concept of self-loving. Any negatives? Well, Promise Down’s sound isn’t original in the slightest (not that that even matters, I like what I’ve heard thus far), but I do wish there were 1 or 2 more songs, maybe some acoustic intermission or instrumental to add some variety to the package and to make the EP last longer than just 15 minutes.

8 Jack Daniel’s bottles out of 10. A short but very enjoyable debut EP, Promise Down take their cues from the likes of Motörhead, Mötley Crüe and others and provide 5 songs of catchy, energetic hard rock with bass-heavy riffs, headbanging drums and greasy vocals. Well-recommended! Now come “Turn To Break The Seal!”