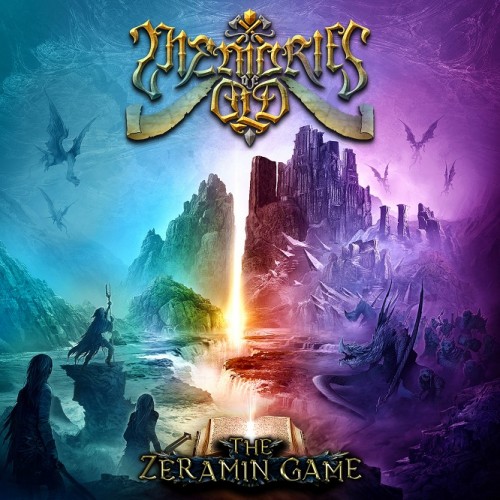 The Zeramin Game is the epic debut album from the British power metal band Memories Of Old. The album is released through the German record label Limb Music and sent to us by our Dutch friends called Hard Life Promotion. Thank you very much!
The composition of the album is really story like, it starts with an introduction and ends with a real finale. This is mostly because Billy Jeffs, the founder of Memories Of Old, started The Zeramin Game as a book, but it’s also a great way to making a nice cohesive album. The story really weaves itself throughout all the different songs.

The opening track of this epic album is a story by itself with super nice spoken text. The voice is beautiful and ambient. The second song is like the name states a real overture, it’s a really great musical starter to a great album, to which I can’t stop listening to! The overture is the perfect instrumental introduction to the awesome riffs and solos on the rest of the album.
“The Land of Xia” was the first song I heard from Memories Of Old and I became an instant fan. I got to know Memories Of Old because I am a big fan of Tommy Johansson and I really was hooked from the first moment I had heard The Land of Xia. A couple of months ago Stijn “Metal Shredder” Daneels asked me if I would like to hear a specific band on his radio show and I asked him to play Memories Of Old, and so I got him hooked too.
The fourth song of the album is “Zera’s Shadow.” This song has a truly majestic intro, just as every other instrumental piece on this album. It has some progressive influences that make it as majestic as possible.  “Some Day Soon” is the most recent song released as a single on July 24. This track is a more mid-tempo tune, but that doesn’t mean it’s less loveable! It’s a very welcome breather for this album and that in the most positive way possible, it makes this album very varied. This song also concludes an awesome instrumental part that absolutely will be loved by every power metal lover like myself.
The sixth track, right in the middle of the album is a more ballad like song with a lot of punch. What’s not to love about that? Tommy’s voice just fits so perfectly with the higher notes. The end of the song feels very fairytale like. The song “Across the Seas” is a faster paced song that gives off a very pirate-like vibe thanks to the joyful beats that makes you want to dance and party, just like the song is meant to do if you listen to the lyrics. It’s made just perfectly. The only thing I could comment on is that I miss a little bit of lyrics in this song because the instrumental part is quite long and heavy in comparison with the rest of the album.
“Arrival” is the eighth song of this epic symphonic power metal album. It’s the epitome of this genre with its rough, heavy parts on one hand and the quicker, upbeat parts on the other hand. It’s also a beautiful part of the story that consists of the Zeramin Game. “A Hooded Traveler” is a point of peace and silence amidst the up tempo power metal from the rest of the album, this short intermezzo is narrated by a truly majestic voice. The tenth tune, “Fowlen’s Revenge,” has a very happy feel to it even though it’s a song about revenge. Albeit it’s about this heavy topic, it is a very positive take on it. Not only are the vocals bang on, but so are the awesome riffs.
The title track of “The Zeramin Game” is not what it seems at first glance, it’s a very ambient song with a lot of punch in the lyrics. It’s a tune with many surprises, this is possible because it’s quite a long song. Sometimes lengthy songs like this one get boring after a couple of minutes, but because of the surprising changes during this particular song you can’t help but loving it for every second. And last but not least the finale, the album’s twelfth song, is the perfect ending to a truly amazing album! It’s an ending like every album is supposed to end, with a bang!

With a powerful mix of progressive, symphonic and power metal, endless technical solos, catchy lyrics and an engaging storyline, This album is awesome and a tip for everyone who loves Sabaton, Majestica, Blind Guardian or Hammerfall!
The only downside I can find is that sometimes the riffs are a bit long, but if that’s your thing, then you will absolutely love this album (like I did).
A big thanks to Hard Life Promotion for sending us the promo version and congrats to Memories of Old for their new album and to Billy, get well soon mate! But in the meantime, you can all enjoy a trip to the “Land of Xia.”