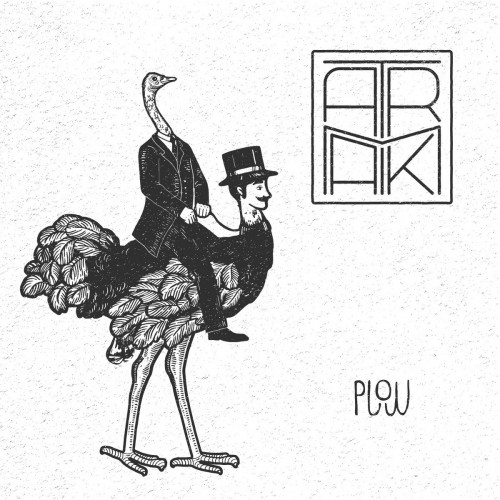 I was recently personally contacted by the young progressive post-metal act Tarmak and they offered me to check out their debut EP “Plow.” And after having enjoyed such great Belgian post acts like Turpentine Valley & Psychonaut in the recent past I’ve had yet another band willing to satisfy my ever growing post-metal appetite. Let’s get shredding!

“Plow” is the debut EP from the Ghent-based progressive post-metal trio Tarmak, who began jamming together in 2014 and after a few years of rehearsing and live shows, the band has put some of their work on record. “Plow” is 4-track EP released independently. It begins with “Krater,” a sweet track with juicy guitar riffs, crunchy bass lines & a short intermission of howling vocals (the only song on the EP to feature singing). The next tune, “Petanque,” goes for faster beats and more aggressive solos with occasional breaks. “Krampus” continues this heavy trend with a mixture of groovy & melodic beats and primal drum gallops. This short EP wraps up with “Toton,” a swinging tune that reminds me of classic rock n’ roll but with more post and progressive influences, obviously.

Tarmak’s style of progressive post-metal isn’t original, but it’s certainly effective and well-produced. Their material features a ton of bass combined with lengthy operatic guitar solos, often played side-by-side with occasional meditative slowdowns. The EP’s 26-minute runtime may seem quite long, but Tarmak manages to keep a tight and engaging pace while ticking off all the necessary post-music boxes. Nothing more, but definitely nothing less!

The EP’s cover art features a hand drawn image of an aristocratic guy with an ostrich head riding an ostrich with an aristocratic guy’s head. It’s a simple, yet profound image of how mankind has captured and domesticated animals ever since time immemorial and it asks the question whether we would be enjoying that exact same fate if the roles were switched around. So instead of man riding beast it’s beast riding man.

I’m a big fan of the “Krampus” track, because of its beautiful tandem of heavy bass with melodic guitar. Atmospheric, multi-layered songs like that are a big reason why I’ve begun digging into post-metal in the past couple of years. Plus the song’s 8-minute runtime feels much shorter than it seems on paper! And lengthy songs that keep me hooked for so many minutes certainly deserve my praise!

Each of the 4 songs are shining examples of Tarmak musical potential and there isn’t anything truly weak about this release. I do wish the release were a track or 2 longer and maybe featured some more vocal interludes, not too many of course, but I did feel that the brief howls in “Krater” were quite solid. Maybe they should give that Mongolian throat signing a legit try just as they had originally intended (at least, that’s what they, probably jokingly, say on their Facebook page). But in all seriousness, it might be more effective than we expect and may give Tarmak a truly unique feel compared to other Belgian post-metal acts like AmenRa, Psychonaut & Turpentine Valley.

7,5 ostrich people out of 10. While Tarmak doesn’t offer much new under the post-metal sun, their “Plow” debut EP does offer an enjoyable 4-track snack that I don’t mind recommending to all post-metal lovers out there. Here’s “Krampus.”