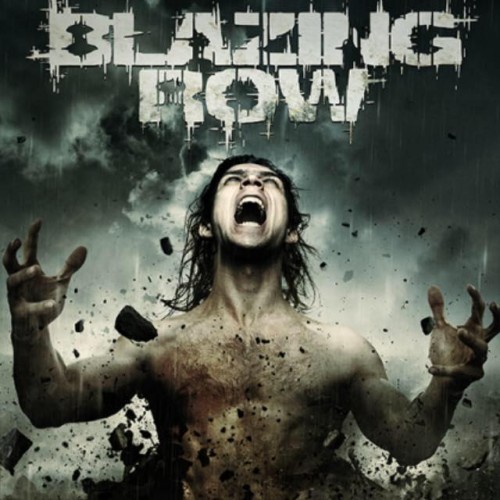 Similarly as to how I had encountered the Emperors of Decay and Blackfall, I was contacted by the band themselves to review their latest release. Jan Maes offered me to share my thoughts about Blazing Row’s debut full length called Emerge and of course, I couldn’t resist the urge to accept his request and get to know his band’s material. And was it good? Good enough for me, so let’s have a go at it!

Simply put, Blazing Row combines death metal grunts and growls with an instrumental pacing inspired by hardcore. So don’t expect highly technical guitar solos or epic sounding vocals. In fact, there virtually aren’t any solos or clean vocals in this album! Instead, you can look forward to gritty guitar shredding, blast beat drumming and death growling.

That’s pretty much how Blazing Row’s debut full-length album Emerge sounds like. It’s a consistent forty minutes ride of unsophisticated brutality reminiscent of Lamb of God, White Chapel and Aera Cura. You may or may not dig this style of heaviness (for lack of a less cheesy term), but I like it, and that’s all that matters!

Social criticism is the main topic that Blazing Row deals with in Emerge. Social revolution (Call to Arms), propaganda (A Wolf among Sheep), consumerism (Doomed to Consume), yeah, you get the picture. Nothing original, but it fits with the band’s sound. ‘Nuff said!

The vision of Devastation

The front cover shows a bare chested guy emerging from the earth and yelling towards the sky! He reminds me of Wolverine, minus the mutton chops, the adamantium claws and the Hugh Jackman Australian accent! Still a badass cover though!

Emerge’s fifth track, A Wolf Among Sheep, is my favorite pick. I particularly enjoy that short but epic guitar tune they’ve put in the final minute of the track. It makes me feel like I am the wolf described in the song, leaving nothing but dead sheep and pools of blood in my wake! If you’ve read some of my previous reviews you know I love instrumentals. So Emerge’s title track is worth mentioning here. It’s an unusually relaxing little track compared to the aggression Blazing Row represents in all the other tracks on the album.

7 slaughtered sheep out of 10. If you dig a blend of death metal with hardcore then Blazing Row’s Emerge certainly is worth listening to. I myself don’t consider this subgenre to be my favorite but I can certainly appreciate the effort Jan and the other guys have put into this.