By demons be driven. 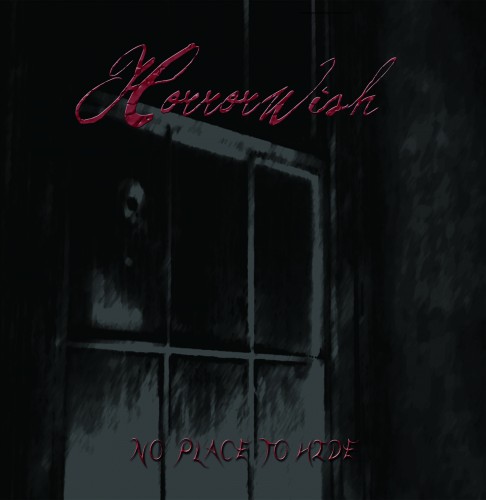 A while ago I was contacted by songwriter and multi-instrumentalist Gio Smet to check out his fantasy inspired solo-project Giotopia. I enjoyed his work and played one of his Giotopia songs (“Kingdom Rise”) on BMS ON AIR last November. Now Gio has returned with Horrorwish, a new solo project and a subsequent debut album that’s now being put on my lap by Hard Life Promotion! Let’s shred our way through this haunted house! Ghouls ‘n Ghosts included!

“No Place to Hide” is the debut album from Gio Smet’s latest solo project Horrorwish. Gio’s earlier musical experiences include the aforementioned Giotopia as well as bands like Gitaron, Devil’s Desire and Sons Of The Migrator and finally several collaborations with artists like Fabio Lione (Rhapsody), Ralf Scheepers (Primal Fear), Herbie Langhans (Avantasia) and Apollo Papathanasio (ex-Firewind). Horrorwish’s “No Place to Hide” is released independently.
The album begins with a nursery rhyme, demonic monologue and menacing pianos (“Welcome to my Nightmare”) and then kicks off for real with “My Horrorwish,” a catchy dark symphonic tune with beautifully melodic guitars and low-pitched, but still very naturally sounding vocals. The next song, the title track of “No Place to Hide” is significantly heavier, with grinding bass lines, faster drum beats and more hissing vocals, but its predecessor’s melodic elements do return in the song’s chorus. Another heavy hitter with a similar structure is the following track, “Demon from Below.” “Whispering Truth” is a nice two-faced song whose clean vocals provide a stark contrast to the crunchy bass that dominates this particular track but this tune does wrap up with some excellent guitar solos.
“Reaching for Peace of Mind” is a slow and “gentle” intermission with acoustic instruments, keyboards and seemingly relaxed vocals along with occasional intervals of distorted guitars. Things turn barbaric with the next track, “Game of Torture,” the riffs on this song are particularly harsh and the underlying violins and keyboards give this track some additional drama. With “The Ghost of Lady V” Horrorwish returns to a more symphonic song similar to the earlier “My Horrorwish” but this time heavier and more guitar-centered.
“Deadly Sinners” is pure bombastic symphony but Gio’s low, thunderous vocals make the song quite unique. Horrorwish returns to a more extreme style with the follow-up, “Beastly Thoughts,” a song that feels very groove metal inspired except for the orchestral chorus. “Hatesick” has a nice marching feel to it and “Desperate Calling” has a deliciously menacing tone thanks to its slow riffs and preaching vocals and finally the powerful “Man in Dreams” wraps up this lengthy release with several soaring guitar solos.
I’d consider Horrorwish’s main strength to be its atmosphere. It’s dark, mysterious, at times orchestral and melodic and at other times faster and barbaric. Gio himself has a deep, operatic voice that whispers and grunts throughout the album as if he’s the owner of some classic house of horrors. The songs are quite lengthy as well, but Gio does manage to keep things interesting with a lot of variety between the tracks and a consistent atmosphere that drags you into the album’s classic horror realm. I think I’ll be playing this album quite often when I’m driving home at night from my work’s evening shift. I think that will be fun, in a scary kind of way.

On the front cover, a ghastly ghoul peeks out from a dirty window to follow its next soul. On the back cover, a demon waits down the basement’s staircase to devour its next victim. Yes, the artwork of Horrorwish’s “No Place to Hide” pays homage to both those classic horror tropes. I also like Horrorwish’s logo, it’s a font similar to Nightwish’s but written in blood! It makes me imagine a parallel universe wherein Nightwish is a horror themed symphonic metal act! Wish I had a demon!
However, the horror setting of this album isn’t like some cheap gory teenage slasher flick. The horrors narrated in the album are of a psychological kind. Fear of darkness and the demons that may or may not lurk within, nightmares, mental breakdown, sadism, the ethereal world and other horror themes.

I admit that I prefer the orchestral tunes the most, songs like the album’s title track, “My Horrorwish,” “Demon From Below,” “Deadly Sinners” and “Man in Dreams.” I also have a soft spot for the vicious riffs of “Game of Torture.” Other than that, the remaining songs on the album are certainly solid with nothing really sticking out in a negative way. It’s a very enjoyable house of horrors trip from beginning to end. So let’s unleash…

8 window peeking ghouls out of 10. With Horrorwish, Gio Smet has fully embraced his dark side with a long and impressive album that features classic horror atmosphere, poetic lyrics, hypnotic vocals, orchestral keyboards and melodic guitars. For full effect, play this album at night, with the lights off and look through your bedroom’s window straight into the dark, endless void. Here’s “My Horrorwish.”