More than I bargained for. 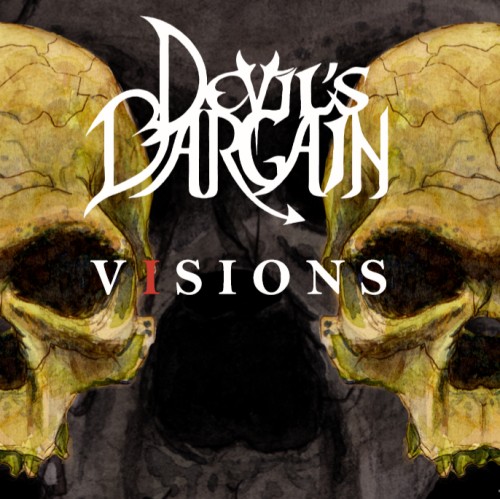 In early 2018 I was contacted by bassist Dirk Poppe to check out his band Devil’s Bargain! He also gave me a link to his band’s freshly released album “Deal with the Devil,” an enjoyable release that I promoted on my now defunct YouTube show Shredder Sunday. Now, 2 years later, Dirk contacted me again to announce Devil’s Bargain’s upcoming new release, “Visions” and my always reliable Dutch friend Mike from Hard Life Promotion also dropped that same album on my desk. So it’s time to get shredding!

“Visions” is the second full-length release from the Belgian heavy metal band Devil’s Bargain, founded in 2013. “Visions” is sent to us by Hard Life Promotion and succeeds the band’s 2018 album “Deal with the Devil” and is once again an independent release. The band’s lineup has changed a bit, with young vocalist Arthur Melchoir Pagliarini replacing David Bruggeman and guitarist Juan Carlos Galdos replacing Manu Van Poeck.
The album begins with “Sewer Rats” and I immediately noticed the change in Devil’s Bargain’s sound compared to “Deal with the Devil,” Arthur has a much higher voice compared to David’s more laidback vocals, the production is improved and the guitars are now much more prominent. All these ingredients make the band sound more epic. “Endless Fight” is a very energetic tune with galloping beats, lengthy guitar solos and Arthur smoothly bringing his vocal range to the high octaves! “No Return” is another upbeat tune sharing many of the ingredients from the previous track but with overall heavier riffs.
Things turn slower and darker with Devil Bargain’s eponymous track with grinding bass lines, anger-filled vocals and menacing riffs. “Sign of the Times” is a much more upbeat song with catchy lyrics and some of the most awesome guitar solos on this release, it reminds me a lot of classic Helloween! “Your Disposal” provides some intimacy to cool down from the previous song’s epicness but this song does still have some occasional bursts of guitar energy. And finally the album ends with the lengthy “Symphony of Silence” a long but beautiful track that puts all of Devil’s Bargain’s main traits on full display.

“Visions” front cover features a duo of golden skulls staring at you with the band’s clean white logo in the middle. While the skulls make the artwork quite cheesy, I do like the contrast created by the use of golden yellow and dark grey and how the letter I in “Visions” is in bright red while the rest of the letters are in white. But what I love the most about the artwork is the band picture, wherein the Devil’s Bargain guys seriously pose around a funny statue of two skeletons taking a selfie.

“Endless Fight,” “Signs of the Times” and “Symphony of Silence” are my favorites of this album, both are great showcases of Devil’s Bargain’s main strengths (specifically the epic guitar work & soaring vocals). Ironically, the latter is the longest song on the album (clocking in at just 8 minutes) but it doesn’t feel that long because of its powerful riffs, captivating vocals and variety in feel and pacing, which brings me to the album’s weak point.
The main weakness that I still feel in Devil’s Bargain current sound is their overall pacing. Some songs, particularly the eponymous song “Devil’s Bargain,” are too drawn out for my tastes and I believe their vocal and guitar strengths will be become even more apparent if they give their next batch of songs a bit more trimming and some extra speed. Still, I’ve had a genuine good time with this album despite the occasional bumps, so I’m going to be generous by giving this release…

8 selfie skeletons out of 10. With a new, energetic vocalist, improved production and more guitar-centered focus Devil’s Bargain’s second album marks a significant upgrade to their sound. If you enjoy old-school metal from the likes of Iron Maiden, Judas Priest & Helloween than you’ll find this album to be one hell of a bargain! Join the “Endless Fight!”