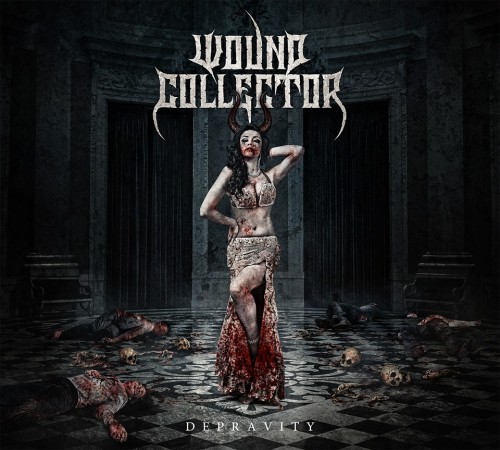 Last November I was contacted by Wound Collector’s bassist Kurt asking me to promote his Woundfest event which took place in December. And of course, he also introduced me to his band Wound Collector and I was quickly hooked after listening to “Worship of the Aton,” one of the band’s earliest songs. And earlier this month Kurt gave me a private link to check out Wound Collector’s new album, “Depravity.” Once again, my Shredder claws are ready to shred through this fresh Belgian metal meat!

“Depravity” is the second album from the Belgian death metal band Wound Collector and is released through the Belgian record label ROTTEN TO THE CORE Records. Describing the album is actually quite simple, old-school death metal with a serious twist! And that twist’s name is saxophone!
Yup, you’ve read that right! The whole essence of Wound Collector’s sound is the mixture of typical death metal vocals and instruments with jazzy saxophone tunes! The saxophone is used in all of Wound Collector’s songs and serves multiple purposes. Sometimes it functions as an intro or outro but most of the times the saxophone plays the same melody as the guitars, creating a bizarre but effective duet between the two instruments and finally the saxophone replaces the guitar as the main solo instrument on the album.
Saxophone aside, the other elements of Wound Collector’s sound are very solid as well. The guitar riffs, bass and drum beats all have a very crunchy quality to them and remind me of the sound of Slayer’s underrated “South of Heaven” album. All the usual death metal ingredients are here, ferocious blast beats, roaring guitars, sudden tempo changes, etc. The vocals are mainly guttural sounds coming from Peter although Guy and Kurt frequently provide shrieking backings. There are also some clean vocals as well but those natural singing parts felt quite awkward. Personally, the harsh vocals suit this kind of sound much better.
Overall, I’m quite impressed with the way they’ve implemented the saxophone, a very un-metal instrument, into the mix without turning it into some cheap gimmick. Instead, they’ve made the saxophone a vital part of their sound and without it, Wound Collector would’ve felt like just another competent but rather unoriginal death metal act. Instead, I would describe Wound Collector as jazz & death metal! The best of both worlds combined into one seductive, bloody package.

A sexy, horned and bloodstained vampire chick stares at you from Depravity’s cover art, but when you look past her seductive gaze you’ll see that she’s surrounded by mutilated corpses and skeletons. It’s a beautiful visual representation of Wound Collector’s style. Underneath the smooth and sexy saxophone layer lays a hellish death metal dimension. In addition, the girl reminds me of the vampire stripper portrayed by Salma Hayek in the cult action-horror movie From Dusk Till Dawn. In fact, the whole album fits quite well as an alternative soundtrack for that movie. It’s a dark night indeed.

Several favorites here! The powerful opening track “Death by Guillotine,” the viciousness of “No God without Terror” (especially the bone chilling sections wherein a melancholic saxophone melody gets intertwined with blast beats), the epic single “Seduced into Depravity” and the beautiful instrumental “Inherit the Crown” (wherein they’ve also added some sweet piano tunes and guitar solos to the mix).
A very honorable mention goes to Wound Collector’s song dedicated to the iconic “In Flanders Fields” poem. Their typically harsh beats and raw vocals add a much more anger-filled flavor to this tale. While read on its own, “In Flanders Fields” is a peaceful speech made by a fallen WWI soldier, who asks the reader to remember him and his other fallen comrades. With Wound Collector, however, “In Flanders Fields” turns into a furious rant screamed out by a fallen WWI soldier, who forces the listener to acknowledge the horrors of war.
My least favorite track: “Royalty Achieved by War.” The whole song felt like a cacophony of various extreme vocals with just a short saxophone solo by the end. The other songs correctly put more emphasis on the dynamic duo of saxophone and guitar, to great effect, as you can see in the scorecard below.

9 blood-soaked saxophones out of 10. Being a fan of both jazz and extreme metal I had a blast going through Wound Collector’s second album. The combination of sophisticated saxophone with brutal death metal instruments and raw vocals gives the material an immense duality and originality! Well recommended to all jazz & death lovers out there! After all, you’re getting “Seduced into Depravity!”