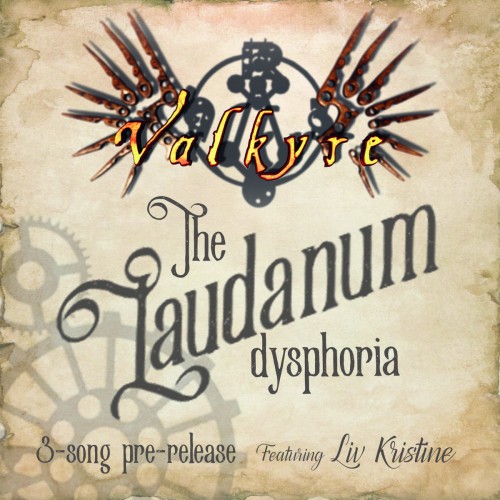 I was recently contacted by Valkyre’s bassist Wouter Verheyen to check out these 3 songs for the upcoming Valkyre album “The Laudanum Dysphoria.” Since these 3 songs feature the iconic Norwegian vocalist Liv Kristine (from Theatre of Tragedy and Leaves’ Eyes fame) I’m now more than thrilled to get my Shredder Claws inside this little preview!

This 3-track prerelease is part of the upcoming album “The Laudanum Dysphoria” from the Ghent-based melodic gothic metal band Valkyre and their first new material since the 2016 single “Riders of the Holy Chair.” The first song on this preview is “Buried,” an energetic symphonic tune wherein Liv’s calm, seemingly joyful vocals stand in stark contrast to the song’s dark lyrics (which deal with a passionate but highly toxic relationship wherein the narrator wishes to escape from).
Then comes “My Worst Enemy” a more bombastic tune with some peaceful piano parts, a beautiful guitar solo and some vicious shredding and slamming. As result, “My Worst Enemy” feels more in line with the classic Valkyre material. The preview ends with “No Safe Place,” another tandem of gothic metal with sharp guitars and an epic chorus.
Compared to Valkyre’s earlier work, these new songs put a bit more emphasis on the symphonic elements compared to the stuff they did in their most recent album, “Our Glorious Demise.” And compared to her work with Leaves’ Eyes, Liv Kristine sings in a slightly lower pitched and therefore more naturally sounding voice while retaining her usual catchiness. Overall, her vocals fit very well with this slightly more symphonic version of Valkyre. Aside from that, much of the original Valkyre’s traits remain, a lot of guitar shredding with several orchestral undertones and catchy, soft-spoken vocals.

The entire world of Valkyre takes place in Belgium during the late 19th century in the midst of the Industrial Revolution, Queen Victoria’s reign, king Leopold II’s colonization of Congo, the rapid technological advances and also the massive pollution and gap between the rich and the poor. And in this ever-changing steam punk world the songs of Valkyre take place. These 3 new Valkyre songs mainly deal with mental struggles such as an abusive relationship, a loss of identity and pure mental breakdown.

My preference goes to the second song in this prerelease, “My Worst Enemy,” I love the powerful opening, the piano parts and the badass guitar riffs that go in smooth tandem with the orchestral keyboards. Needless to say, I’m very impatient to hear the other song’s Valkyre has made for the upcoming “Laudanum Dysphoria” album.

7 Zeppelins out of 10. If you enjoy Leaves’ Eyes or Valkyre’s earlier material then this 3-track preview of the latter’s upcoming album is certainly worth checking out. Valkyre’s more guitar-centric approach and steampunk setting along with Liv Kirstine’s typically operatic vocals make for a refreshing take on the gothic and symphonic metal subgenres. The band will be touring Europe with Liv Kristine this spring so be sure to check out the teaser below! The pre-release is available via Bandcamp: https://valkyremusic.bandcamp.com/album/3-song-pre-release-the-laudanum-dysphoria.