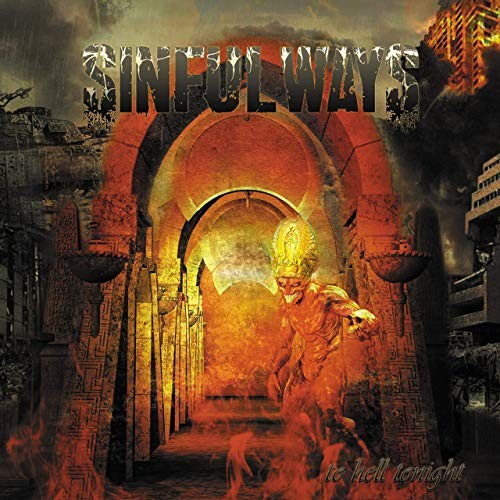 A couple of weeks ago Sinful Ways’ frontman Brad Lake got to know me via our weekly radio show on www.purerockradio.net (Belgian Metal Shredder On Air, every Friday night) and so he gave me a Spotify link to his band’s debut EP. You all know how we at Belgian Metal Shredder love to check out little-known metal material so let’s kick off the shredding!

“To Hell Tonight” is the debut EP from the Canadian crossover metal band Sinful Ways, which saw the light of day in 2016. The EP is an independent release sent to us directly by frontman Brad. This 4-track release kicks off strong with the title track, a fast tune wherein distorted riffs and harsh vocals go back and forth with melodic guitars and clean singing. It’s a frantic and powerful opener that shows off the band’s many influences from both old-school and new-school metal acts.
Then comes “Modern Messiah,” a more aggressive song that will certainly evoke some solid headbanging and moshing along with a beautiful chorus. Highly energetic and melodic beats get a center-stage treatment with the EP’s third track “Rest In Peace” alongside a duet of grunts and clean vocals. The song does get slower and moodier, however, during its middle-part with the sound of marching boots giving me the impression of a funeral procession. However, the song does get back to its upbeat roots by the end and wraps up with a soaring guitar solo. The EP ends with a more vocal-centered tune called “Apologies,” not quite the adequate finale for this short release (especially after songs like the aforementioned “Rest in Peace”) but still enjoyable overall.

The album’s front cover opens up to a huge hell gate in the middle of a ruined city and a fiery demon with a devilish smile invites us in. I’ve always loved cover art that’s more than just the band logo and in fact, with Doom Eternal coming this month, this hell on earth image immediately makes me think of that game! Hell yeah!

Last Friday I played the track “Rest in Peace” on BMS ON AIR and for good reason! It’s a rollercoaster of a song that instantly got me hooked! It is as if the band is celebrating life one last time before getting into the coffin with the song’s energetic beginning then the band “dies” and gets “buried” during the slower, darker middle part and then gets back to life again to celebrate all over again! Life, death and reincarnation!
Personally, I like the EP’s title track & “Rest in Peace” the most because they focus more on high-octane guitars and catchy choruses which are the band’s major strengths in my opinion. The EP’s other two songs, especially “Apologies,” put more emphasis on vocals and while both Brad and Andres do a consistently solid job in the clean and harsh departments respectively, those tunes didn’t feel as memorable as the others on this EP. In any case, Sinful Ways has made a positive first impression on me so let’s open up…

7,5 hell gates out of 10. Sinful Ways first recorded outing is a short but very enjoyable metal mix whose ingredients include both distorted and melodic guitars, catchy clean and naturally harsh vocals and tight, upbeat rhythms! A solid release for everyone looking for some good headbanging! Here’s “Modern Messiah.”