Mathematical bloodletting to the core. 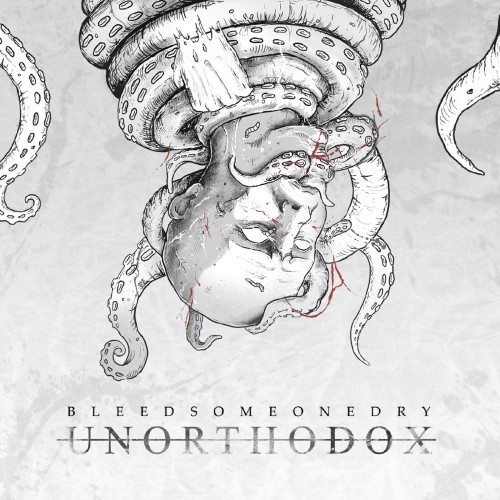 Review written by Glenn “Terra Shredder” Van Bockstaele.
Bleed Someone Dry is an Italian deathcore/mathcore band formed in 2007. That same year they released their debut “The World is Falling in Tragedy” and after some lineup struggles they found their core substance in May 2012 and that same year they went in the studio to record their second album “Subjects”. In 2014 they signed with Italian record label Wormholedeath who rereleased the “Subjects” album and then the band toured with I Declare War. In 2015 they released their third record “Post Mortem/Veritas” and supported major acts like Gojira and Cryptopsy.
And now I have received their fourth album “Unorthodox.” The album kicks off with “Vexation” that beautifully introduces all the elements of Bleed Someone Dry’s sound. Deathcore growls and distorted guitars combined with progressive mathcore and ambient sound effects. It's a mix that goes very well and blasts even more furiously in the next track, “Deceiver,” which even has a sweet melodic touch. The title track of “Unorthodox” is another great blend of heavy deathcore beats raging on while the progressive mathcore jingles in the background. The title track also features a mesmerizing chorus between the ranting vocals.
Track 4, “The Worst is Yet to Come” is a slower song with scorching main riffs and some of the most furious vocals on this release combined with bone-crushing breakdowns. Then comes “Plague of Broken Dreams” which is a more melodic tune with drilling drum beats and powerful guitars. The next track, “All That We'll Never Have” is another great example of Bleed Someone Dry’s flexibility, a nice mathcore sound with the pounding breaks of deathcore and a variety of strong vocal styles. “The Modern Dissident Movement” starts off slow but quickly explodes into another frantic track before calming down once again.
Track 8, “Agoraphobia” is a more experimental song wherein the usual death and mathcore stuff gets mixed up with industrial beats. The next song “Elysium” is a meditative song which features a robotic voice reading Charlie Chaplin’s iconic ending speech from “The Great Dictator” while the moody instruments gradually become more numerous and intense. The album ends with the powerful “Mephistophelian” one final, highly melodic tune during which Jonathan and Niccolo’s guitar work truly shines along with Alessio’s typically convincing extreme vocal delivery, Mattia’s crisp bass and Alan’s piercing drum work.
If you believe deathcore is just some screaming with blast beats and distorted riffs than Bleed Someone Dry is more than willing to prove you otherwise! Badass vocals, vicious beats and an often recurring sense of melody make this one very enjoyable deathcore/mathcore release! Fans of After the Burial will most definitely love this. Here’s the “Unorthodox” title track!