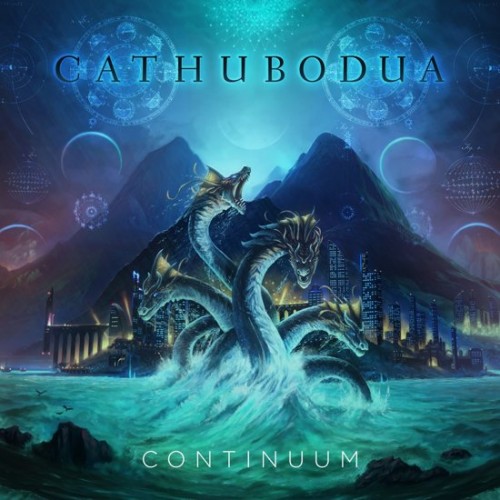 Early 2017 I was contacted by Cathubodua’s bassist Peter to take a look at his fledging band’s enjoyable first EP “Opus I: Dawn.” Shortly thereafter, he and his jam colleagues competed in the Black-Out Jam, a metal battle organized in the Boogiewoogie music bar in Geraardsbergen, near my hometown. That same day I shredded them (read the interview: http://belgianmetalshredder.be/interviews/78) and I was genuinely impressed by their short but effective performance later that day (which helped them win the contest). Since then, I frequently saw Cathubodua perform and saw how close they were to a massive victory at the Wacken Metal Battle 2019 (they were just a couple of points short of Primal Creation, the eventual winner). And with that growing confidence and momentum, Cathubodua has now dropped their debut album on my Shredder table! I’ve waited a long time for this and my Shredder claws are extra sharp!

“Continuum” is the first full-length release from the Belgian symphonic metal band Cathubodua. Released through German record label Massacre Records and sent to me by the label executives themselves. Danke schön!
Cathubodua describe their sound as epic symphonic metal and while this description is cheesy at first, it’s actually spot-on! With an orchestral instrumental opening and ending (“Dawn” & “Dusk” respectively) and tracks like “Abyss” & “Hydra” sounding like the bombastic choir-fueled metal from Epica while songs like “The Fire” & “My Way to Glory” have folk influences similar to Nightwish and finally there are even some death metal influenced beats and black metal vocals sprinkled throughout. One thing I particularly love about the band’s style is how vocalist Sara’s soprano singing is frequently put in direct tandem with drummer Vincent’s blast beat salvos (songs like “Deified” & “My Way to Glory” are great examples of this).
Another major element that makes Cathubodua stands out from similar symphonic metal bands is the highly effective use of violin. While this particular instrument has been used in many other metal acts before, Cathubodua’s violist Katrien plays her violin more like a guitar rather than a mere support instrument. Hell, she even throws in a few solos of herself throughout the album. Sometimes guitarist Kyron unleashes his own solo right alongside hers which creates an excellent dynamic, particularly in the song “A Treacherous Maze.” Violin aside, Cathubodua also employs several other instruments like piano, choirs, custom percussion, Middle-Eastern melodies, electro samples and guest appearances from some noticeable Benelux metal singers, most famous among those are Adam Denlinger from MaYaN and our country’s very own Simon Durson from Carnation!
All things considered, Cathubodua’s “Continuum” is one hell of a varied and cinematic experience that ticks off all the necessary symphonic metal boxes but brings in some unusual other influences in to create a familiar yet unique sound that’s full of genuine power and energy that I’m sure fans of orchestral, film and extreme music will certainly enjoy!

The whole album’s story is inspired by the Dungeons& Dragons tabletop role-playing franchise with the band functioning as a Dungeon Master, telling a tale of a hero travelling through a fantasy world in search of adventure and glory. Obviously his journey is full of mystery, splendor and peril and there are even a few non-fantasy topics swooped in like social prejudices, death and reincarnation. One of the things our hero encounters during his journey is the massive, multi-headed hydra that poses gloriously on Continuum’s cover art. I truly love this detailed, colorful artwork and it reminds me a lot of the badass hydra opening battle from God of War (the original one, not that Last of Us clone of the same name).

From the moment “Hero of Ages” epic intro kicked in, I knew this was going to be one hell of a track and guess what? It damn sure was! It’s a very rhythmic song and I love the heroic main riff of this awesome tune. It still gives me goose bumps every time that intro begins. Other favorites include “Hydra,” (one of the heaviest and most guitar oriented songs on the album), “My Way to Glory” (which has a similar style to the song “Glorious Days,” my favorite tune from their earlier EP) and “A Treacherous Maze” (a frantic song made even more hectic thanks to Simon’s roaring guest vocals).
Do I have anything negative to say about “Continuum?” Not much actually, I did feel that some songs could’ve being trimmed down a little (especially “Apotheosis” was a bit too slow and dragged out for my tastes) and I wished Kyron’s guitar work were slightly more prominent. Other than that, I’ve got little more to say except for God of War’s protagonist Kratos to come in and slice the hydra with his…

9 Blades of Chaos out of 10. Cathubodua’s “Continuum” is a lengthy, ambitious and glorious album that builds on the symphonic, folk & extreme metal formula from their earlier EP, cranks those elements up to eleven and adds much new stuff to the table. It’s a release from a band that has earned the right to be genuinely called epic symphonic metal! Now let us all strive to become a true “Hero of Ages.”