No, this is not a pop song! 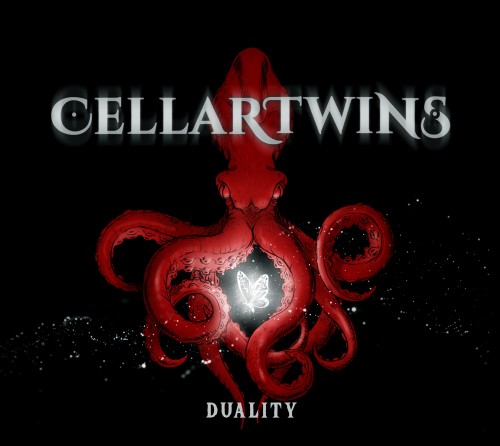 Review written by Nathalie "Smaggie Shredder" Van Hecke.
Cellar Twins is a Belgian progressive rock band founded in 2014, after debuting with their 5-track self-titled EP in 2017 they’ve now brought out their first album, “Duality,” released independently and sent to us by our friends at Hard Life Promotion.
The album kicks off with “Millennium,” after an orchestral intro of cinematic vibes the band starts blasting some solid rock riffs. This opening track features a mixture of energetic, marching beats and slow melodic tunes as well as beautifully moody lyrics dealing with angst, rage, frustration and other mental issues, things that everyone can relate to at some point in life. Then we move on to Molotov Parade, a more aggressive song with a strong anarchic atmosphere. This particular track shows the bands inspirations from such acts like Avenged Sevenfold and Volbeat, I personally listen to Avenged Sevenfold a lot and I felt their vibe in Cellar Twins which is awesome!
The third song, “Cloud Walker,” is a slow, dreamy song with soft-spoken vocals although there are a few powerful musical outbursts spread throughout as well as a magnificent guitar solo to wrap it all up! After “Cloud Walker” we get “Selfear,” and to be honest this track’s title made me so curious that I played this song first before listening to the rest of the “Duality album.” And I loved every single part of it, especially how perfectly the vocals and instrumental parts work together. The song frequently switches between melodic & harsh beats and Carl’s natural, angelic voice fits all the way through, at times strong & confident and at others angry & desperate. Then we reach my personal favorite song on the album, “Social waste.” A catchy, high-energy song that, like “Molotov Parade,” fits perfectly as a tune kick off a riot against the establishment! I particularly love the line, “Say you're sorry now, say you're sorry now, down on your knees! No, this is not a pop song!”
The next track, “Antithesis” is another flexible tune with galloping beats, bass-heavy riffs, catchy vocals and a lengthy guitar solo. Then comes “Wovoka,” a song that, similarly to “Millennium” before it, starts with an operatic opening before the usual Cellar Twins barrage begins. “Tales of Autumn” is a slow, intimate tune that gradually builds up in intensity and eventually ends with awesome guitar, bass & drum work. “$olace” is a confident rocking tune as Cellar Twins has already made earlier in this album and finally “Promesse” brings a ton of heavy darkness to the mix with bass fueled riffs, hard pounding drums and echoing vocals. An excellent finale to this great album!
Cellar Twins takes inspirations from such acts like Avenged Sevenfold, Alter Bridge, Smashing Pumpkins & many more and have crafted their own unique identity of progressive & alternative rock! The band showcases legit strength & confidence while maintaining a sense of vulnerability and relatability! Whether you’re into laidback rock or prefer heart-pumping metal, Cellar Twins will impress you and leave you wanting more! Now let’s start the “Molotov Parade!”
Personal rating: 4,5/5