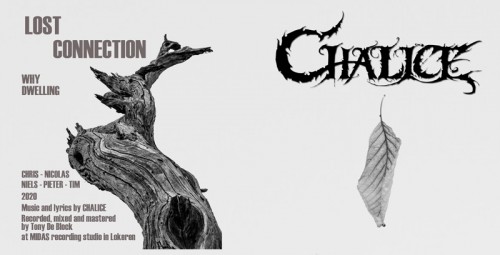 In 2018 I got to know Chalice when I shredded their latest album “Ashes of Hope,” an awesome blend of death, thrash & black metal that the band brought out to celebrate their 20th anniversary (check it out: http://belgianmetalshredder.be/reviews/86)! Now Chalice will be unleashing a 2-track EP next weekend, which will be released independently but our friends at Hard Life Promotion have already sent it to us! Since I had a great time with their earlier album, I’m now in an even bigger mood to shred!

“Lost Connection” is the second EP from the Belgian thrash/death metal band Chalice, succeeding their 2015 debut EP “Closure” and their second album “Ashes of Hope” from 2018. This 2-track EP begins with “Dwelling,” a song that reminds me a lot of “A Death without Warning,” the finale from the “Ashes of Hope” album, meaning this is a slow and dark tune with vocalist Pieter’s usual raw grunts and bone chilling screams backed up by sharp riffs and menacing beats from his band colleagues. The EP’s second song, “Why,” showcases Chalice’s more melodic side with galloping rhythms, epic guitar solos and more flexibility in terms of pacing, riffs (both distorted and melodic) and vocal styles (ranging between soft whispers, desperate howls, angry growls & painful shrieks). It therefore made me think of the tracks “Eternal Sleep” & “Musings on the Bank,” both also from “Ashes of Hope.”
As you have most likely realized by now, the “Lost Connection” EP reminded me a lot of the earlier “Ashes of Hope” release and that’s for several reasons. Production-wise both releases are more than solid and the overall quality of the songs is very consistent as well. Once again, Chalice manages to create a dreary atmosphere full of psychological horror that feels like early Black Sabbath along with elements from classic death & thrash metal. It’s a meticulously balanced sound and Chalice beautifully shines all those aforementioned departments.

As always, Chalice’s songs are about mental struggles like fear, rejection, loneliness, despair, paranoia and other psychological sufferings. The EP’s front cover is in the same ash grey color as in “Ashes of Hope” and the dead tree and leaf offer a simple but effective visual representation of the grim stench of death that haunts the world of Chalice.

I admit that I tremendously enjoyed both songs on “Lost Connection,” each in their own way. No need to repeat myself here, I’ve already described both EP’s songs in great detail in the Shredding Basics chapter, so go check that out.
Then what’s the bad side of this EP? Simple, 2 songs is very little for an EP. Even though both songs are about 5 minutes in length I still ended up craving to drink more out of this Chalice! Anyway, quality certainly reigns supreme over quantity in this EP, so let’s chop some…

8 dead trees out of 10. Despite being a 2-track EP this short release provides a great introduction to Chalice’s dark, intimidating but balanced and tasteful cocktail of thrash, death & black metal. The 2 songs on “Lost Connection” serve as 2 sides of the same Chalice coin and I can warmly recommend this EP along with the “Ashes of Hope” album to everyone who likes their music gritty, intense and psychologically horrific yet very melodic and varied! WHY? That’s why!