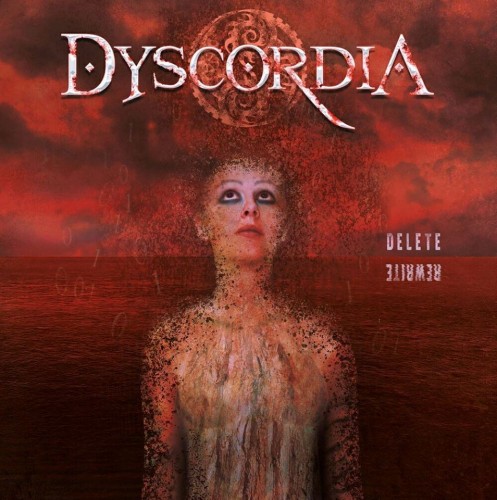 One of the most awesome releases I shredded back in 2016 was the second album from Dyscordia titled “Words in Ruin,” (my review of that classic: http://belgianmetalshredder.be/reviews/28) It was a blast from beginning to end and since then I’ve seen Dyscordia perform on a yearly basis. Today Dyscordia releases their much anticipated 3rd full-length! Enough talk, my clawed Shredder fingers are itching!

“Delete/Rewrite” is the 3rd album from the Kortrijk-based progressive metal band Dyscordia, formed in 2010 and consisting of 6 veteran musicians who’ve had earlier experiences in acts like Gwyllion, Double Diamond, Artrach, Anesthesy, Impedigon and Rhymes of Destruction. The album is released through their hometown record label Road Mark Productions with distribution handled by Dutch Music Works. And finally, the album was sent to us by our Dutch comrades at Hard Life Promotion!
The album kicks off with its title track, an experimental hybrid of a song that combines meditative electronic tunes and soft-spoken vocals from Piet with harsh vocals from guitarist Stefan and highly melodic riffs. And this song in particular serves as a perfect introduction to Dyscordia’s sound in general. It’s progressive metal that’s very multifaceted in everything from the riffs and beats to the vocals and overall atmosphere. And each song following after the opening title tune puts emphasis on a different side of Dyscordia. And since I’m a frequent listener to Dyscordia’s material, a lot of these new songs felt fresh yet familiar to me.
The album’s second track, “This House,” is more classic metal song similar to the single “Bail Me Out” from the earlier album, featuring galloping beats supported by operatic, echoing vocals. Then comes “Rage,” one of the heaviest songs on the release and wherein Piet’s angelic vocals provide a stark contrast to the raging beats and Stefan’s background roars. “The Curse of Mediocracy” has a very upbeat feel with soaring guitars, a duet between Piet’s singing and Stefan’s grunting and epic keyboards. Because of all those elements this song reminded me of “Chthonic Star,” one of my all-time favorite tunes in Dyscordia’s discography. Both “Merry Go Round” and “Castle High” have a hectic vibe (especially when it comes to the drums) and are comparable to “Harlequin’s Grief” in terms of overall style. Things go really cinematic in “The Cards Have Turned” where the epic guitar riffs are combined with operatic piano tunes. Then we go back on the heavy road with the hard-pounding and bass-heavy “Strangers in the Dark.” And finally there’s the album’s longest track, “Silent Tears,” which, similar to the fan-favorite “Words in Ruin” track, is a song that starts off slow and melancholic and gradually becomes more bombastic and optimistic. A truly powerful finale to the joyride that was “Delete/Rewrite.”
While Dyscordia’s sound is versatile to say the least, there always remains a solid consistency throughout this album and that’s the catchy and high melodic songwriting. It’s a delicate blender of classic, power, symphonic, death and progressive metal that frequently switches gears and so provides a very engaging experience. Overall, Dyscordia’s sound has an awesome larger-than-life feel that, in my opinion, can certainly be enjoyed by most heavy music lovers out there!

As always, Dyscordia’s songs are very metaphoric and psychological in theme, with songs dealing about imprisonment, philosophy, spirituality, grief and sorrow, hope and redemption and so much more. The front cover features a young woman who’s slowly fading away in the midst of a hellish red desert environment. Did Thanos just snap his fingers? Maybe that’s why she doesn’t feel so good.

I’ve got plenty of favorites on “Delete/Rewrite.” The experimental nature of the title track, the heaviness of “Rage” and “Strangers in the Dark,” the cinematic awesomeness of “The Cards have turned” and finally the epic “Silent Tears.”
While I appreciate the comedic intentions behind the album’s true ending, “Rise and Try,” which features Piet joyfully singing about trying, failing and trying again until you succeed in your efforts, the sound of the other band members humming some random shit as the song’s “main riff” feels weird to say the least. It’s cheesy and unnecessary, especially compared to the extremely powerful “Silent Tears,” the album’s serious finale. So needless to say, I won’t be listening to “Rise and Try” very often, that being said…

9 Thanos snaps out of 10. This has been a lengthy review but I’ve had so much to tell about this album that I couldn’t resist shredding this gem piece by piece! If you’ve enjoyed the band’s earlier releases then getting “Delete/Rewrite” should be an absolute no-brainer! It features all the numerous elements that makes Dyscordia an awesome progressive metal band and adds some new things to the mix to make this an even more multi-faceted album. Well recommended! Now let’s “Delete/Rewrite” this shred!