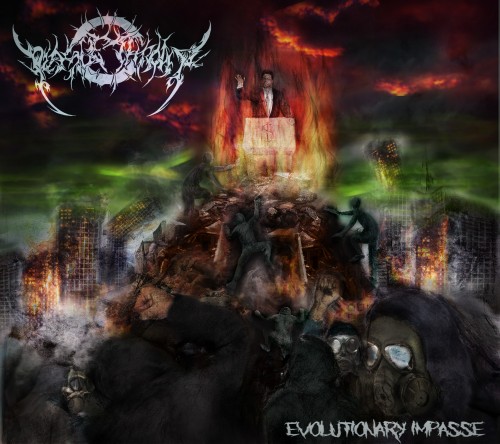 Review written by Glenn “Terra Shredder” Van Bockstaele.
Plague Throat is an Indian death metal band formed in 2006 who debuted in 2013 with the EP “An Exordium to Contagion” followed up by the album “The Human Paradox” in 2017. And last year they brought out their next EP, “Evolutionary Impasse,” released through the Indian record label Transcending Obscurity Records and sent to us by Proximity Music Management. Thanks a lot!
The EP kicks off with the furious beats of the instrumental “The Epoche of Catastrophe I,” which previews Plague Throat’s effective mixture of death and grind influences and then it goes straight to “The Epoche of Catastrophe II.” Ferocious blast beats, naturally sounding raw vocals with plenty of clarity and lots of technical guitar riffing. These vibes continue in the next song, “Instruments of Antipathy,” but some melody does harmoniously sweep in amongst the relentless chaos. The riffs in this particular track remind me of such bands like Gojira.
The next tune, “Primitive Defense Force,” is a classic death metal song that neatly ticks off all the necessary boxes. Fast beats, snarly vocals, frequent abrupt tempo changes and crisp guitars. It’s a filthy beauty! Next up is “Reshaping a Paralyzed World,” which brings back that touch of grindcore which also appears in the EP’s early songs and in this particular tune the drums truly drill straight through your skull! It reminds me a bit of deathcore. The EP ends with one of my personal favorite songs on this release, “Portraying a Void.” A song with a genius main riff that takes on many different forms throughout the track, backed up by sharp bass, galloping drums and crunchy vocals. What more can I say? I’m already looking forward to the 2nd full-length!
While India’s metal scene may be quite obscure compared to our Western counterparts, acts like Plague Throat prove that there’s plenty of metal goodness to be found in the Bharat republic. If you enjoy Aborted or any other death/grind hybrid act then you should certainly check out this “Evolutionary Impasse!” Here’s the lyric video for “Reshaping a Paralyzed World.”
80/100