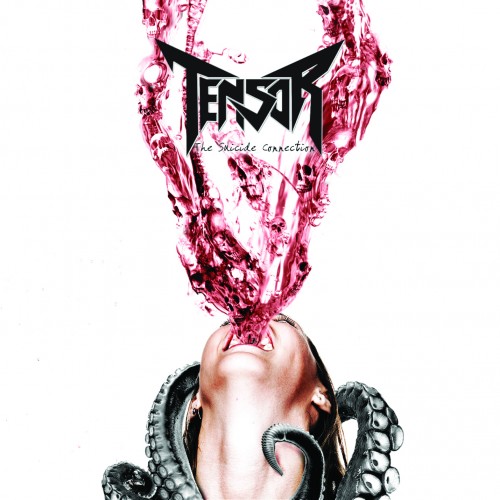 Review written by Nathalie Van Hecke.
Tensor is a Belgian progressive death and thrash metal band, in 2018 they released a two-track demo called “The Collector” and now they’ve brought us their four-track debut EP, “Suicide Connection” and it’s an independent release. The EP starts with “Beyond the Void” a nice song with strong guitar riffs, growling vocals and galloping beats. The track deals with the sense of emptiness and loneliness and the vocals have a natural sense of despair to them. The EP’s next tune is my personal favorite on this release, “The Gates of Madness” starts off with a kind of relaxing guitar riff before the madness commences in the form of vicious melodies, blasting drums and anger-filled singing. This song’s theme is a continuation of “Beyond the Void,” wherein the narrator’s despair of his lonely existence turns into pure rage. The EP’s remaining two songs, “Reflections” and “Window over Winters Past” both follow a similar road and theme as the earlier tracks but are longer and put more emphasis on Tensor’s progressive side. “Window over Winters Past,” in particular has a lot of epic guitar work, especially during its finale!
While the EP could still use some more overall power and speed, I can tell you that Tensor’s first EP will get your heart pounding! It’s a short, two-faced release that mixes the aggression of death metal with the wizardry of progressive and if either of those two subgenres suits your fancy, than you can’t go wrong with this EP! Here’s the video for the EP’s single, “Window over Winters Past.”
Personal rating: 3/5