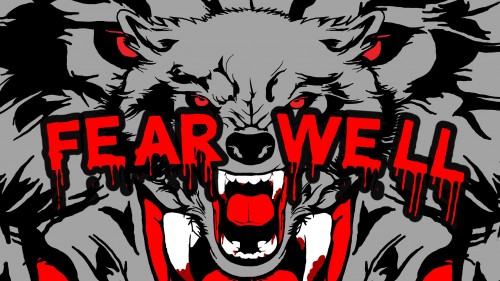 Catalyst first appeared on my Shredder radar about a year ago when lead guitarist Philip had sent me a couple of his band’s songs (such as the enjoyable track “Delirium Nostrum”). I also saw them in March this year as the opening band of the inaugural edition of Detonation – A Day Full Of Metal and I had a fun time seeing those five well-dressed guys on stage! Last summer I’ve written a short review on their single “Sustainable Dignity” (read it: http://belgianmetalshredder.be/reviews/164) and during the Halloween holiday a few days ago the band released a brand new tune called “Fear Well” and once again Philip asked for my thoughts on the new material, so here the shredding goes!

“Fear Well” is the fifth YouTube released song from the Belgian progressive death metal band Catalyst which started in 2017. While their first songs were longer and slower and had some parts which I personally considered as filler, since “Sustainable Dignity” Catalyst have made their songs shorter, faster and overall better paced. And that style continues with this new single.
Like the aforementioned “Sustainable Dignity,” “Fear Well” kicks off at full speed with distorted but melodic riffs, quick drum beats and harsh vocals. After a minute the song slows down into thunderous guitars and vocals in which singer Jeroen once again mixes crisp harsh vocals with clean singing (and the latter reminds me so much of Serj Tankian’s vocal style from System of a Down) and during the latter part of the song lead guitarist Philip again brings up some beautiful guitar solos before eventually returning to the thrash and death frenzy which “Fear Well” started with, making the song and rabbit hunt go full circle.
While “Fear Well” shares many similarities with the earlier single “Sustainable Dignity,” I do find the whole concept of “Fear Well” to be very well presented. As the song’s title hints at, the song’s main theme is about fear and all the feelings associated with it. Paranoia, uncertainty, the feeling of being chased and the foreboding sense of misery and death. And all those sentiments are represented both in the varied sections of “Fear Well” as well as in the colorful lyric video (which you can watch at the end of this article). The video features a wolf hunting down a couple of rabbits and the song’s riffs mix between slow and dark tunes, representing dread and uncertainty, and faster beats that could be seen as either running from fear or facing it head on. And particularly the lyrics have a strong combative feel with the chorus “fight or flight, face it or hide” being pretty badass. That’s pretty much it, time for the…

8 rabbit-chasing wolves out 10. While I’ve enjoyed this new Catalyst single a lot, I do like their previous song, “Sustainable Dignity” a bit better because of the latter’s slightly tighter pacing and frantic “be quick or be dead” atmosphere. “Fear Well,” on the other hand, puts more emphasis on Catalyst’s melodic aspects, catchy lyrics as well as being having a more fleshed out concept. But no matter what suits your fancy, Catalyst’s new song is once again a very fun tune for those looking for an experimental yet tasty cocktail of death, thrash and progressive metal. Here’s the lyric video of “Fear Well,” it begins with the cinematic intro tune which Catalyst kicks off their live shows while the actual song begins at 1:57. Enjoy and have a great Sunday!