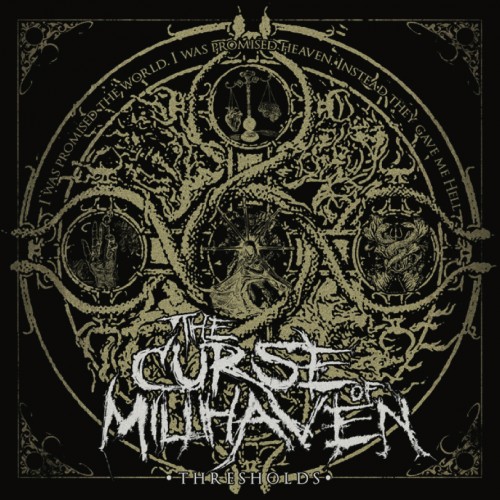 Review written by Glenn "Terra Shredder" Van Bockstaele.
The Curse Of Millhaven is a Belgian melodic death metal band founded in 2012 from the ashes of such acts like In Chains, At World's End and Fatal Recoil. In 2014 they released their debut album “Vestibule of Hell” (which Stijn “Metal Shredder” reviewed: http://belgianmetalshredder.be/reviews/41). An impressive release that descended through the nine circles of Hell and across the seven deadly sins! In 2017 they followed it up with an EP called “Plagues” (which Stijn “Metal Shredder” also reviewed: http://belgianmetalshredder.be/reviews/68) which, as you may have already guessed, dealt with the Black Plague and the worldwide death and misery it caused. And now, The Curse of Millhaven’s second release has arrived! Released through Belgian record label Dust & Bones Records. Let’s shred it!
Compared to their two earlier releases, The Curse of Millhaven’s newest release offers a more balanced sound that mixes classic death metal ferociousness with technical prowess and with a huge sense of melody and pacing. All those aforementioned elements had been present in their earlier work, but this time everything has been fine-tuned and beefier than ever before! There are plenty of sections with fast head bang inducing death metal blast beats from Bart as well as many slower parts wherein Kurt’s and Jeroen’s impressively melodic guitar riffs shine throughout! Those melodic parts remind me of bands like Kataklysm and I’ve even noticed some Behemoth influences. Jasper’s vocals are similar in style to how he sang in “Plagues,” with a crispy rawness that’s clear and easily understandable without digging through the lyrics booklet. He really sounds like a beast unleashed from Hell itself as he narrates about torment and how much you, as a mere human being, could possibly endure! Safe to say that this “torment” is well worth enduring until the very end!
And if all that death metal violence wasn’t enough, the band has also added a sweet short acoustic guitar intermission called “Enlightenment” as well as a 3-minute instrumental finale called “Cruciato Mentis,” which, unlike the song’s Latin name implies, does not feel like mental torment at all. In fact, it’s a beautiful marching tune and like the “Enlightenment” track before it, functions as welcoming cool down from all this brutality. One other thing in which the Curse of Millhaven truly shines is in the grim and menacing atmosphere they conjure up, especially in this release. It feels like the gates of hell opening in front of you and inviting you into its treacherous, pain-ridden yet also very majestic realm. It’s heavy and brutal, but also very stylish and even somewhat seductive.
All things considered, “Thresholds” takes the best bits of the Curse of Millhaven’s earlier releases, cranks it all up to eleven and even adds in a few twists that you won’t be expecting from a band this raw! The Curse of Millhaven guys keep on pushing their individual and collective limits and with this new album they’ve grown to a much higher level! And since I’ve already seen them live multiple times already, I can safely assure you that both on stage and on record they’re a tightly playing infernal war machine. Now enjoy the music video for “Shelter.”
85/100