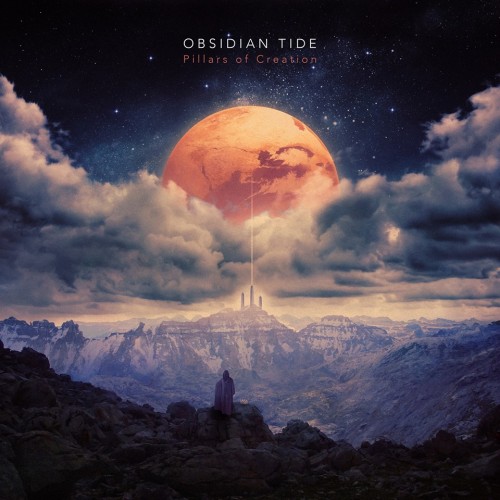 Review written by Glenn “Terra Shredder” Van Bockstaele.
Obsidian Tide is an Israelian progressive/death metal band founded in 2012. Recently we were contacted by Obsidian Tide’s bassist Shachar to check out his band’s material. Stijn “Metal Shredder” quickly added one of their songs (“The Harbinger and the Millennial Vengeance”) to our BELGIAN METAL SHREDDER ON AIR radio show and now it’s my turn to shred through the band’s independent debut album, “Pillars of Creation.”
“Pillars of Creation” is a concept album telling the tale of a man who goes on a journey of enlightenment. On his journey he witnesses riveting stories and learns horrible truths. Finally he makes a bold choice to follow his conscience and his choices cause changes on a global scale. Music-wise, Obsidian Tide plays the kind of music that Opeth would be playing if they had remained a death metal act. Specifically, “Pillars of Creation” features mid-paced and highly meditative tunes with relaxed vocals from guitarist Oz as well as several fast and heavy death metal sections with grunts from bassist Shachar and finally plenty of progressive metal guitar solos. In addition to the traditional metal trio of guitar, bass and drums, Obsidian Tide also employs many other instruments including flute, piano, saxophone, acoustic guitar, violin and classic percussion as well featuring several guest musicians, most famous among those is Symphony X’s bassist Mike LePond.
And with that large a musical arsenal, Obsidian Tide manages to make the album’s lengthy tracks interesting and full of twists and turns. One awesome example of this flexibility is the album’s third song, “King of a New Realm,” opening with slow guitars and moaning violins before moving on to powerful metal beats and roaring vocals from Shachar. Then going to a barrage of consecutive guitar solos, a lengthy jazzy piano section, a short sample of footsteps and singing birds before the metal riffs return and finally a crispy bass solo backed by demonic whispers to wrap it all up! Another great song is the ending track, “Magnanimous” with has some sweet saxophone tunes played alongside the heavy melodies.
All things considered, Obsidian Tide's debut album is an inspired modern take on the progressive death metal subgenre. It’s a multi-faceted beast that invites multiple listening sessions in order to fully experience everything this impressive release has to offer. Here’s a “little” appetizer in the form of “The Harbinger and the Millennial Vengeance.”
85/100