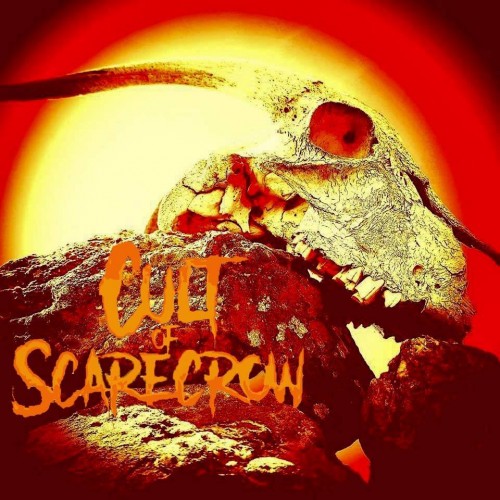 My first taste of Cult of Scarecrow’s doom was in late 2018 when the band joined the Wacken Metal Battle Belgium 2019 competition. They eventually made it to the semifinals where I saw them deliver a more than solid performance during the semifinals in the Asgaard bar in Ghent and although they didn’t reach the finals, they did leave a very positive impression on me. I also received a physical copy of their eponymous debut EP and now it’s damn time to shred this 4-horned goat!

Cult of Scarecrow’s self-titled EP is their first release after the band was formed in 2017 by ex-members of acts like Dead Serious, Battering Ram, Tears of Colossus and Innerface. It’s an independent release sent to us by our Dutch friends at Hard Life Promotion and consists of 4 tracks for a healthy 33-minute playtime.
While the band describe themselves as melodic doom metal, Cult Of Scarecrow does add several ingredients to the usual doom metal sound to keep things interesting. For instance, they use plenty of keyboard tunes to either add dark ambience or to put a Deep Purple like orchestral touch to the mix. Every song also features technical guitar solos, catchy choruses and finally there’s much variety in the overall pacing of the songs. But what stands out the most for me in Cult of Scarecrow’s style is the atmosphere they pull off. I can best describe their style as the kind of music that you would hear in some unholy cathedral wherein six priests are chanting and playing threatening yet also very inviting devilish tunes while performing blood splattering, hellish rites. Black magic straight from the Necronomicon Ex-Mortis! Bound in human flesh and inked in human blood!
Aside from the excellent demon summoning atmosphere, I also have to give big props to front priest Filip De Wilde. Unlike many other doom metal vocalists, Filip sings cleanly and his vocals have a calm and meditative yet also a strict and commanding quality to them. But above all else, his voice is seductive, almost to the point of hypnotizing. Particularly in the opening track, “The Hour of Bloodrun,” his chants are really mesmerizing. His delivery of the chorus line “we close our eyes” did send some shivers down my spine and that doesn’t happen often. So all things considered, Cult of Scarecrow’s sound is a true seduction towards the infernal void and I’m already looking forward to my next trip to this nightmarish realm!

The front cover features a glowing sun and a longhorn’s skull sitting on some rocks. What I love about the cover art is its ambiguity. On the one hand, it could be a scene from a spaghetti western, with the sun rising above the desert. On the other hand, that same sun could be the yellow mushroom cloud from a nuclear explosion, destroying all life it touches. And I believe it’s the latter that the band is communicating, since Cult of Scarecrow’s material deals with contemporary human issues like depression, drug and alcohol abuse, relentless and destructive greed and the resulting destruction of all life of earth. Have a nice day!

My top choice goes to the epic opening tune “The Hour of Bloodrun.” The crunchy just highly melodic guitar riffs, the dark operatic keyboards, the harmonious drum beats and the hypnotizing vocals, it’s all here in full force! Hell, even the opening samples of rattlesnakes and screaming pigs add in building up the dark ritualistic atmosphere. Where’s a virgin blood sacrifice when you need one?
While Cult of Scarecrow’s title track has its highlights (mainly the very effective use of keyboards) this particular song did take a while to get going. Personally, I would’ve cut out the minute-long opening sample of wind blows and shrieking crows as well as shortening the slow and brooding two minute section that comes right after that. Aside from that 3-minute intro, this song’s remaining 5-minutes are pretty damn good.

8 Necronomicons out of 10. Although doom metal is one of my least favorite subgenres I’m more than pleased with the fun and engaging additions and twists that Cult of Scarecrow have pulled off with their first release. The EP oozes with atmosphere and its nightmarish darkness will keep you engaged all the way to the end! Even if doom metal isn’t quite your thing, this still is one Cult well worth joining. Here’s the music video for “Last Words from Black Birds."